Our client, age 23, and his baby’s mother did not get along.  In fact, they fought constantly.  One day, the two got in another argument and the mother left for work.  Our client remained back at home in the apartment the two shared.  After she left, the two continued arguing over the phone, as was not uncommon.

Summary:  Long Beach, client charged with felony arson and felony vandalism after burning girlfriend’s clothes and kicking in her furniture, destroying it; case resolved for misdemeanor arson and vandalism.

This argument was different for some reason.  Our client became enraged at his baby’s mother and decided to let her know with more than words.  He gathered up an armful of her clothing and took it to the kitchen, where he placed it over an open flame on the stove and burned it for about 20 seconds.  He then went to her room and kicked her dresser so hard that it fell apart into about five pieces.

When his girlfriend’s clothes were burned, neighbors smelled smoke and called 911.  Our client then left, so when police arrived, police were unable to arrest him.  Fireman broke into the apartment just to be certain nothing was still on fire and found the charred clothes and the broken furniture.

Eventually, our client was arrested and placed in jail, where he stayed for less than two days before his arraignment.  On the date of his arraignment on felony charges, no case was filed, so our client was released from jail under Penal Code § 825 (one must be arraigned within 48 hours of one’s arrest, excluding Sundays and holidays).  Our client had no prior criminal record.

He then naively went to the police station to retrieve his cell phone.  The arson detective warmly welcomed our client and asked him a few questions, assuring him three times distinctly that “the case is over.  You have nothing to worry about.”  Our client even asked for confirmation, before answering the questions, “so like, nothing is going to happen?”  The detective said “correct.”

The client then confessed to starting the fire in a rage and kicking in his girlfriend’s dresser.  He was then immediately arrested, much to his surprise.  The phone had been used as bait, or a hostage, to entice him to the police station and then police lied to him to get him to confess.

The client remained in custody for 45 days before bailing out.  The initial offer was three years in state prison.  Probation was not even offered.

Our office was retained and listened to the “confession tape” in shock.  Greg immediately filed a motion to suppress the entire tape under Penal Code § 1538.5, as the officers had misrepresented the law.  This is distinguishable from a misrepresentation of the facts, which is a proper investigation technique and allowed.  A misrepresentation of the law, however, in order to elicit a confession is improper and makes the confession vulnerable to suppression under the Fourth Amendment as an illegal search and seizure.

Greg also filed a motion to reclassify the case as a misdemeanor under Penal Code § 17(b)(4), due to the very minor nature of the “arson” and the fact that the five-year old dresser was worth far, far less than $400, which is the dividing line between felony and misdemeanor vandalism. 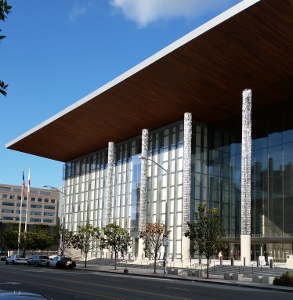 Governor George Deukmejian Courthouse
(Long Beach Courthouse)
The prosecution’s response to the two motions was to offer our client a plea bargain to two misdemeanor charges, with five years of summary probation, fifty-two batterer’s program classes, 100 days of Cal-Trans and a $500 fine, plus penalties and assessments (total payment would be approximately $2750).