The following summary is not a typical summary of a DUI case. Rather, it is a cautionary tale to those suspected of DUI and facing DUI charges, as it exemplifies how certain prosecuting agencies will often refuse to negotiate in the face of irrefutable evidence. In other words, sometimes the best facts still receive no reciprocal, good-faith response from the prosecutor. After all, DUI cases are tough at times and it is tremendously naïve to believe that all prosecutors negotiate separate from their own egos.

Our client, age 30, was returning home to Santa Monica after working her shift at a Signal Hill bar. Before leaving the bar, she gulped down a gin and tonic and then left in her car.

The Gist of This Summary:  Not all DUI cases resolve in the client’s favor. Sometimes, a cop and/or the judge helps fill in for evidence that conflicts with the police report, leaving the client with a raw deal, as this summary describes.

Immediately after leaving the bar, she noticed there was a police car following her. She spent a few seconds confirming that the police car was following her as she made a few turns to get to the I-405.

However, before she could even travel a half-mile from the bar, the police officer illuminated his overhead lights to make a traffic stop. The officer told our client that our client was swerving all over the road.

The client’s breath smelled like gin from the drink she had just consumed and so the officers suspected she was DUI. They asked her if she would like to submit to a preliminary alcohol screening (PAS) test and she refused, as is legal at the roadside. Officers then asked her to perform a series of field sobriety tests in her high heels, refusing to allow her to take off her shoes when she requested this.

She was then arrested for DUI and taken to the Long Beach police station, where she submitted to a breath test, which measured her breath alcohol at 0.095% and 0.096% blood alcohol content (BAC).

She was then booked for DUI, spent the night in the jail and released the following morning.

That day, once she took a nap and felt better, she called Greg Hill & Associates. Greg then met with her the same day and listened to the client describe what had happened.

Greg explained how “swerving all over the road” may have been hyperbole by the officers, but nonetheless there were legal standards for whether the “swerving” was substantial enough for a police officer to make a traffic stop. After all, no one drives perfectly straight at all times. Not even a police officer does so. 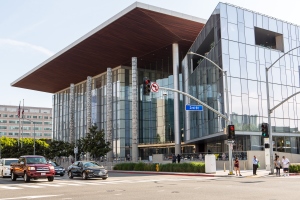 Long Beach Superior Courthouse
Greg then appeared at the arraignment and saw in the police report that the police officers had used an MVARS recording device (a mobile video-audio recording device, or dash cam). Over the next few court appearances in the Long Beach Superior Court, Greg got the MVARS and reviewed it for himself. The police report claimed that officers observed our client almost strike the roadside curb to our client’s right, but the MVARS showed this never happened. The police report also stated that our client’s car crossed over the double-yellow center lines and this definitely did not happen.

Greg therefore filed a motion to suppress the evidence of our client’s blood alcohol content, based on the traffic stop being for invalid reasons, as the MVARS revealed no other grounds for a valid, legal traffic stop.

The police officer testified that his stop was based on reasons he perceived before the MVARS began recording and the judge denied the motion.

The young prosecutor, who clearly knew the police officer was fabricating while under oath, then refused to offer our client a wet reckless as a plea bargain to resolve the case.

Thus, in contrast to the prior 122 summaries presented on this website, one must never forget that prosecutors are people, too, and subject to the same weaknesses as anyone else.

For more information about issues, please click on the following articles: