Our client, age 28, was arrested by the California Highway Patrol on the northbound 405 for allegedly weaving within his lane.

What One Should Learn from This Summary:  The DMV is willing to overlook many mistakes that a police officer may make in the traffic stop or in administering the field sobriety tests, but there are certain things that do matter even if violated only once.  In this case, the arresting officer failed to sign the DS-367 wherein he or she affirmed service of the temporary license to the driver.

The reader of this summary may find such a purported reason as worth a second thought.  Indeed, everyone weaves to a degree, even if ever so slightly, when driving.  No one drives perfectly parallel to the lane lines.  Our law recognizes this in People v. Perez (1985) 221 Cal.Rptr. 776, 778, where the court said that only “pronounced weaving within a lane provides an officer with reasonable cause to stop a vehicle on suspicion of driving under the influence where such weaving continues for a substantial distance” (emphasis added).  Perez goes on to say that even if a driver were to cross over a lane line, if the car does not do so more than six inches, a traffic stop is improper.

Another case, U.S. v. Colin (2002) 314 F.3d 439, the 9th Circuit Court of Appeals went further.  It held that the officer’s stop was illegal, stating “[t]ouching a dividing line, even if a small portion of the body of the car veers into a neighboring lane, satisfies the state’s requirement that that a driver drive as ‘nearly as practical within a single lane.”  In other words, a traffic stop even after “a small portion” of a car crosses into a neighboring lane is improper.

Here, however, the CHP specified no distance over which he observed our client driving to qualify the driving as “pronounced weaving” to support the legality of the stop.  The CHP also did not describe even a “small portion” of our client’s car crossing into an adjacent lane. 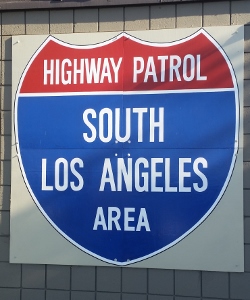 Later in the police report for the arrest, the CHP did not describe our client as speeding, making an unsafe exit from the freeway, coming to an abrupt stop or parking at an unsafe angle.

It did describe our client’s eyes as red and watery, but he had the flu and officers did not ask him about this.  It also described “the strong odor of an alcoholic beverage” as coming from the inside of the car, but our client had a very drunk passenger and officers never asked anyone about the passenger’s drinking.  Instead, the officer simply attributed the “strong odor” of alcohol (alcohol actually is odorless) to our client entirely.

Making matters worse, at the scene, the CHP officer had our client provide a breath sample while sitting down, a position making it is much more difficult to breath out deep lung air.  This violated the manufacturer’s operating procedures.  The officer also had our client begin the test just fourteen minutes after being pulled over, in violation of section 1219.3 of Title 17 of the California Code, which requires that officers observe the subject continuously for fifteen minutes prior to eliciting a breath sample. Sandra Molenda v. DMV (2009, 6th App. Dist.) 172 Cal.App.4th 974.

In our experience, the DMV would be willing to overlook each such shortcomings, even in the cumulative.

However, the arresting officer did not sign the bottom of page one of the DS-367, which was to attest that our client was served a copy of the temporary license.  This was a big deal to the DMV and we pointed it out in our brief.  On this basis, the DMV reinstated the license without hesitation.

Sometimes, we find that small issues are much more important than we ever expect.  This case and our small victory here (a big victory for the client because he kept his license) exemplify why attention to detail is vital.

For more information about DMV Hearings in general and what happens if one loses , click on the following articles: