Our client, a sixteen-year-old mother of a three-month-old girl, was arrested for alleged child abuse.  She was angry and frustrated to have a baby.  The father was in prison, leaving her alone to raise the child.
One day, overwhelmed by the responsibility of having a child and high on meth, she allegedly threw a milk bottle at her daughter, but missed, hitting the child’s carrier.  The bottle bounced off the carrier, hitting the baby’s face, cutting her lip.  The bleeding did not seem to stop.
Our client immediately took the baby to the pediatrician’s office to have the laceration examined.  She thought the baby may need stitches.  She was evasive as to how the cut happened, which piqued the suspicions of the doctor.  She was nervous and the doctor could see she had been using drugs, as she was still high on meth when she was at the doctor’s office.

What One Should Learn from This Summary:  Child abuse by sixteen-year old mom, our client.  Client was under the influence of drugs when she takes baby to doctor, who calls the Long Beach Police Department and DCFS.  Greg Hill goes to police station immediately and later negotiates probation for the client.

Upon arrival to our client’s house, officers observed drug paraphernalia in the open, but did nothing in response.  They asked our client several questions and asked to see the baby.  While the officers were at the location, a social worker arrived, interviewed our client and decided to take the baby into DCFS (Department of Child & Family Services) custody.  Our client then became hysterical, thinking she was going to permanently lose the baby to foster care.
The officers assisted the social worker by placing the child in the car seat and the social worker left with the baby.

Our client’s uncle called our office when the Long Beach Police asked to interview the client a second time.  Greg Hill spoke with the uncle about the situation.  The uncle told Greg that the police were quite familiar with the client, as she was stopped a few times before for possession of a controlled substance, but never arrested and never prosecuted.  The father of the baby, before he was taken away to prison, refused to be involved with the client after getting her pregnant.
Greg went to the police station the very same day and was present during the police interview and attempted to control the scope of the questions.  Nevertheless, our client was held in custody for one count of Child Abuse (Penal Code § 273 (a)), a misdemeanor. 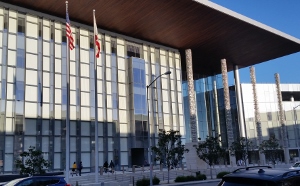 Long Beach Superior Courthouse
As the client was a juvenile, the Los Angeles County Juvenile Probation Department reviewed the case and agreed to a pre-filing diversion program for the client (no case was filed in juvenile court).  Greg Hill then negotiated a resolution with the probation officer in which our client was placed in a two-year program of supervision, wherein she agreed to take 52 sessions of weekly parenting classes, enroll in a high school continuation program and complete an outpatient drug treatment program.
If she completed the parenting classes, the drug treatment program and passed random drug tests over the next two years, no case would be filed.  After twelve parenting classes, and while still in the drug treatment program, she would be reunited with her daughter.
During the first twelve weeks, however, she could not see her daughter at all, which was extremely tough on her.  It was hoped that she would continue her education and earn a high school diploma, avoid drug use in her future and become a more responsible parent.
Our client indeed did complete the rehabilitation program and she was reunited with her child.  Her uncle was extremely happy with this arrangement and believed that by having our office go to the police station to be with his niece, the police invited the probation department to review the case and offer pre-filing diversion.
For more information about the issues in this case summary, click on the following articles:
Contact us.