Our client, age 30, had an on-again, off-again relationship with an older woman who perceived our client as rich, or being about to inherit significant money.  The older woman would stop by our client’s house in Rancho Palos Verdes and flirt with him, hoping that their relationship would progress towards marriage.
Our client, however, really was not interested in this older woman and had his own girlfriend.  He told this older woman to leave his house on multiple occasions.  One time, he asked her to leave and she resented this so much that she vandalized his car parked in the driveway.

Summary in 50 Words or Less:  Our client in Lomita was the obsession of a woman who believed he would one day inherit a great deal of money, so she wanted to marry him.  Our client was not interested in her and once that became clear, she fabricated a domestic violence incident so he would take her seriously.  The initial offer was two years in county jail.  The case was ultimately resolved for 120 days in county jail.

On other times, our client would just ignore her, even though she would sit in his living room and even inspect his text messages and social media postings.
One day, as she was doing this, she noticed that our client had paid the cell phone bill of some other female.  She became enraged with jealousy that our client was possibly financially supporting someone else and would do so in much greater ways in the future.
So, the older woman began yelling at our client that he was scum and a loser.  Our client told the older woman to leave, but she would not and started to hit our client.  Our client therefore tried to move her out the front door, but she kicked him and scratched him.  Finally, our client simply walked out of the home and decided to walk around the block to cool down.  As he was walking away, she yelled at him, threatening that she was going to “bring him down.”
During this time, the older woman called the Lomita Sheriffs Department and reported that she was a victim of domestic abuse.  The Lomita Sheriffs immediately responded to the home and the older woman showed the sheriffs her arms, claiming “no bruises show here yet, but they will” and her upper lip, claiming our client hit her there, although there was no visible injury.
The Lomita Sheriffs then arrested our client on charges of felony domestic violence.  Our client’s employer bailed out our client.  Our client was a plumber.
After bail was posted, our client called Greg Hill & Associates.  He explained the facts of the case and that he was on felony probation for financial elder abuse (Penal Code § 368(d)), arising over his taking over $28,000 in funds from his grandmother by forging her signature on her checks with payments to him.  He had been on such probation for approximately two years. 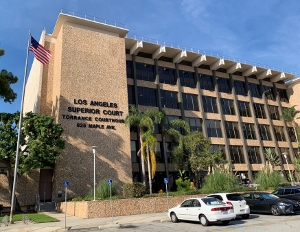 Torrance Superior Courthouse
Greg Hill then appeared with the client in the Torrance Superior Court, surprised that the case was filed as a felony because the injuries were so minor (really misdemeanor in nature, if anything at all).  The Torrance District Attorney, however, viewed the case as quite serious because of the probation violation allegation.
She understood that the victim was essentially hoping to financially ingratiate herself in our client’s wealth (unclear if there really was any such thing) and that she was now recanting on her story of domestic violence.
The initial offer was low-term of two years in state prison, which was shocking, but it was premised on the probation violation more than that domestic violence.  The client was most worried about losing his job if he had to serve time in custody.
After much negotiating, Greg was able to resolve the case for an admission of violating probation, then being reinstated on formal probation in the elder abuse case.  As to the domestic violence case, he was placed on five years of formal probation with 120 days in county jail to be served on the weekender program, fifty-two batterers classes, a $500 contribution to an approved batterers fund and $220 in court fees.
The client was happy to avoid time in state prison and keep working, although he would be spending many weekends in jail to accumulate 120 days to meet his obligations.
For more information about domestic violence, please click on the following articles:
Contact us.
Serving Torrance, Long Beach, Compton, Airport Courthouses and Other Courthouses.