Our client, age 73, had no prior criminal history of any sort.  She was a model citizen, in fact, having volunteered nearly 4,000 hours of her time at a local hospital since she retired.

There was a heat wave in Southern California and she was finishing up her volunteering for the day.  She was somewhat distracted by the news of an old friend of hers who had passed away unexpectedly.  She knew the family well and her friend’s husband.  She wanted to help the family, but did not know the most appropriate way to offer her help.

In a Nutshell:  Our client, age 73 with no prior criminal history, accidentally walked out of the Torrance Vons on Crenshaw with $189 in groceries she forgot to pay for.  Case resolved with judicial diversion in Torrance Superior Court for a dismissal after six months if she just stayed out of the store and picked up no new charges.

The heat made her car extremely hot, so after she got in, she turned up the air conditioning, but it was slow to work.  She therefore decided to do her weekly grocery shopping a bit early at the Vons on the corner of Crenshaw and Lomita Boulevard.  Besides, the store had air conditioning and she needed cooler air.

So she went into the store, picking up items that she would otherwise buy later in the week.  She walked slowly, savoring the air conditioning and thinking about her friend’s family.  Our client filled up her cloth shopping bags that she brought in with her.  She selected over 55 items, including milk, cheese, yogurt, wine, bread, cereal and paper towels.

When she finished picking out everything she needed, after an hour in the store, she accidentally walked out of the store.  She did not mean to exit without paying, but she was distracted and thinking about her friend’s family and the heat her car would greet her with, as it was about 5:15 p.m. 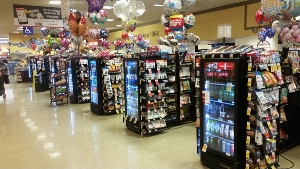 Inside a Vons Grocery Store
The moment she stepped out of the store, loss prevention approached her and asked her to return to the store.  Our client was mortified and ashamed, quickly apologizing and bursting into tears.

Our client did not even offer an excuse of being distracted by her thoughts.

Loss prevention methodically inventoried the contents of her shopping bags and called the Torrance Police Department, which came to the Vons and transported her to the Torrance Police Station.  She was then booked and released on her own recognizance after about three hours.

It took the client about three weeks to call an attorney, as she was so embarrassed by the incident.  When she called Greg Hill & Associates, she was at the verge of crying throughout the phone call.  She described what had happened and expressed her big concern that she might be barred from volunteering any more at the hospital if convicted of shoplifting.

Greg explained that judicial diversion would certainly be available for her, but the terms set by the judge could be tough because of the dollar value of the items stolen and the quantity (55) suggested audacity and that maybe she had done this before.  To help allay this suspicion, Greg recommended that the client enroll in and complete an online shoplifting program, which the client did immediately (within two days).

Greg then went to the Torrance Courthouse for the client’s arraignment about four weeks later.  The client stayed at the hospital, continuing her volunteering activity.

The Torrance City Prosecutor handling the case did consider the case a serious case for the reasons Greg expected.  The initial offer was that the client would have to plea “no contest” to a charge of petty theft (Penal Code § 484(a)) and in return, she would be placed on three years of summary probation and have to pay $300 in court fines, plus penalties and assessments (about $1,400 total), plus pay the Torrance booking fee ($458).

Greg then requested judicial diversion from the judge in Torrance handling this case.  The judge asked about the client’s age, criminal history, her volunteering activity, her mental state at the time of the event and her physical health.  Greg answered each of the questions in full and the judge placed the client on judicial diversion for six months with only one term: that she stay out of the Vons at issue.

Greg had never seen such a gentle judicial diversion offered and explained the terms to the client.  He explained that the case would be dismissed in six months if the client simply stayed out of Vons and stayed out of trouble with the police.  The client was very thankful for the judge’s kindness and empathy.