Sometimes, the most valuable skill possessed by an attorney is understanding the procedures and their effects.  Some of this knowledge is gained in a formal setting through law school, but really understanding such procedures is only gained through experience.
After twenty-one years of practice, we are still learning the nuances of procedures learned in our first year of practice and we continue to learn how the newest laws really operate in the courtrooms.
In the following case, our client, age 26, called because he was arrested for DUI, yet he had not consumed any alcohol at all.  He had endured a rough night sleeping in his car after his wife kicked him out of the house and was driving to work as a caterer for an early morning job on a movie set.
He was sleepy, made worse because he had returned home quite late at night (near midnight), only to be told by his wife that he would have to sleep in his car and not in the house.  His car was not conducive to sleep, but eventually he got an hour or two.
After our client exited the 105 Freeway going westbound, he proceeded to head south on Sepulveda toward Manhattan Beach for work.  He never made it, falling asleep a few blocks south of the 105 and driving up on the sidewalk to his right.
The collision with the curb awoke our client just in time to steer back onto the road, but not before he had two flat tires.  He then drove his car into a parking lot to survey the damage.
Within seconds, an El Segundo police officer arrived at the scene and got out of his car.  Our client was still groggy, so the officer interpreted this as our client being impaired by alcohol, although our client insisted he had merely fallen asleep behind the wheel. 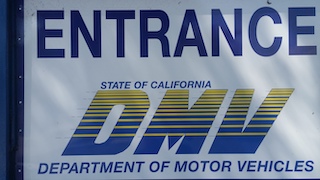 DMV
The officer then asked our client for his driver’s license, which our client could not provide because it was still suspended from a DUI conviction just two months earlier.
The officer then asked our client to provide a breath sample on a PAS device, which our client refused.  This would normally not be a problem and it is even one’s right to refuse a PAS test unless one is on probation for DUI like our client.
The officer then hauled in our client to the El Segundo Police Department and our client provided a blood sample.  Due to years of heroin abuse (he had even served four years in prison in Missouri for possession of heroin for sales), he felt quite comfortable around needles.
The client was then released and called Greg Hill & Associates.  Greg met with the client the same day.
The client explained what had happened and how he really had not consumed any alcohol in weeks, but the officer insisted that he was drunk.  Greg commented that our client’s manner of talking very slowly and with a Midwest accent may have been responsible for such a conclusion.
Greg then reserved a DMV Hearing just to prevent the automatic suspension of his driving privileges, although his license was already suspended from the recent DUI conviction, but he had just one more month left on that suspension.
The client then discussed the facts with Greg and Greg pointed out that the only clear law he violated was refusing to submit to a Preliminary Alcohol Screening (PAS) test, and perhaps reckless driving, as well as driving on a suspended license (Vehicle Code § 14601.2).
The DMV set a hearing date and time, which Greg Hill & Associates advised the client of so he could be present at the hearing, just in case.
However, as Greg predicted, once the DMV received the blood alcohol results from the CHP laboratory in Downey, it cancelled the hearing and set aside the suspension for this alleged DUI.
The client was happy with this, as he desperately needed the ability to drive because his job demanded he travel all over Los Angeles and public transportation and Uber were just impractical.
For more information about DMV Hearings and a set aside, please click on the following articles:
Contact us.
Serving Torrance, Long Beach, Compton, Airport Courthouses and Other Courthouses.