Our client and his friend, both age 16, went to the Del Amo Mall to buy some new clothes.  It was summer, so they selected some shorts and fashionable t-shirts.
As they were walking up and down the aisles at the Burlington Coat Factory, our client’s friend realized how expensive such clothes were and suggested they just put the clothes in their backpack and walk out without paying.
Our client agreed, stuffing $136.21 in clothes into his backpack (two t-shirts and four pairs of shorts).  Our client’s friend tried to shoplifting even more clothes ($193.72 in value).  Apparently, loss prevention officers were watching the two and immediately confronted the two as they stepped outside the store with their backpacks bulging from the clothes they had not paid for inside.
Our client’s friend ran away, leaving our client face-to-face with the loss prevention officer.  Our client immediately removed his backpack and began taking out the clothing inside, but the loss prevention officer wanted more.  He asked to look at our client’s phone (apparently to get the phone number and/or name of the client’s friend) and our client refused to hand over his phone. 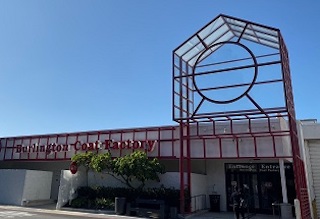 Burlington Coat Factory
Instead, our client decided to run away as well in that instant, but loss prevention threw our client to the hard-concrete floor and began choking him.  Our client pushed off the loss prevention officer and grabbed the loss prevention officer’s phone in the process, eventually breaking free and offering to exchange phones with the loss prevention officer.
The loss prevention officer agreed to this in an odd peaceful exchange and our client then ran away, to join his friend, who was waiting about 50 feet away.
The two ran out of the Del Amo Mall and toward the Hometown Buffett.  The loss prevention officer, meanwhile, got in his white sedan and followed the client and his friend on foot, while calling the Torrance Police for assistance.  Our client then ran over toward the Ralph’s Supermarket and went behind it, hiding under a semi-trailer.  Police observed the two laying down under the semi-trailer and ordered them to surrender, but the two refused and jumped the fence behind the Ralph’s, then crossed Madrona Avenue and went into the Madrona Marsh nature area.
Torrance Police then used their drone assets to monitor the marsh area and found our client hiding in a bush.  It took the police several hours more to find our client’s friend, but they eventually did, too.
Our client was taken to the Torrance Police Department, where he was booked and released to his shocked parents several hours later.  The client’s father was a well-established engineer and his mom worked for an automobile parts distributor, so they were in disbelief to what their son had allegedly done.
The father called up Greg Hill & Associates later the same day and discussed the case facts with Greg Hill.  Greg explained that while robbery (Penal Code § 211) is a very serious offense and evading a police officer (Penal Code § 148(a)(1)) is also not a minor misdemeanor, he thought the juvenile probation department might refer the case to a diversion program for juvenile under Welfare & Institutions Code § 654.1.  Greg explained that there was Teen Court and the JOIN (Juvenile Offender Intervention Network) that might be available and explained how each one worked.
Greg then requested to meet with the juvenile and his parents.  The client was nearly a straight-A student taking many honors and AP classes.  He was a varsity athlete and during that summer, was taking an online AP course and had been selected for a prestigious summer internship of working at the refinery in Torrance, ironically awarded to him by the City of Torrance (the same agency that arrested him).
Greg then wrote a short letter to the Long Beach Juvenile District Attorney’s Office, as well as the Torrance Probation Department, enclosing our client’s high school transcript, his varsity letter award, his letter announcing his selection as a scholarship winner for the summer internship (collectively called a “Good Guy” packet), and suggesting that the case be referred to JOIN or Teen Court.
After sending the letters in, there was no response and the arraignment date arrived.  Greg, the client, and the client’s parents appeared in the Long Beach Juvenile Court.  Greg then spoke with the DA and requested that the matter be referred to Teen Court or JOIN.
The prosecutor, who Greg had known from his years of experience and had gotten along with the prosecutor in other prior assignments (the prosecutor was former military), said he would look into it.
At the continued arraignment date about one month later, the client, the client’s parents and Greg returned to court.  The prosecutor had seen our client’s “Good Guy” packet and decided to refer the matter to Teen Court.  This was a huge relief for the client and his parents, as the case would be dismissed and the court file and the arrest record would be sealed if the client completed Teen Court and whatever punishment the Teen Court decided upon, but it would be far less stigmatizing to his future than having an adjudication for robbery and evading arrest, which certainly could affect his college admissions and student loans.
For more information about robbery, evading arrest and teen court, please click on the following articles:
Contact us.