Edward Rezek was charged in Orange County Superior Court with delaying or obstructing a police officer in the performance of his duties (Penal Code § 148 (a) (1)) and vandalism (Penal Code § 594 (a)), both misdemeanors.

The Point of This Article:  Police cannot “hide” witness statements to a crime, perhaps which are favorable to defendant, by placing such statements in a police officer’s personnel file, as they are discoverable nonetheless under Penal Code § 1054.1, as the following case summary illustrates from an Orange County case.

Rezek allegedly punched the hood of a car driven by a private security guard in a parking lot at a Tustin shopping center, causing damage to the vehicle.  The security guard then made a citizen’s arrest.  Two off-duty Tustin police officers were nearby and came to assist.   Rezek then allegedly resisted arrest.

Rezek claimed he slapped the hood of the security guard’s car when the security guard almost ran him over in a cross-walk.  He then walked over to a restaurant and the two plain clothes police officers dragged him away without identifying themselves.  Rezek claims one of the officers broke his arm.  He was taken to the hospital, where his broken arm was confirmed.   Rezek also claimed the restaurant manager witnessed the tussle and would confirm Rezek’s version of events. 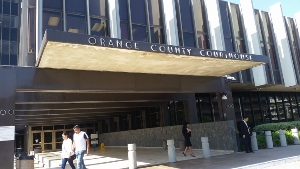 After being charged, Rezek filed a Pitchess motion (Pitchess v. Superior Court (1974) 11 Cal.3d 53), seeking information from the arresting officers’ personal files, hopefully revealing instances of prior use of excessive force.  The motion was granted and it was revealed that one of the officers allegedly used excessive force six years earlier.

An internal affairs investigation then ensued into Rezek’s case.  Rezek then filed a second motion, seeking the production of three percipient witness statements regarding the parking lot and restaurant incident, which had been obtained by internal affairs.

The Orange County Superior Court judge then handling the case denied the motion, stating that it did not have jurisdiction to “make sure” the prosecution complied with its earlier Pitchess motion ruling.

The Fourth Appellate District determined that the Orange County judge abused his discretion in this regard.  Moreover, the City of Tustin did not demonstrate any reason why a statement obtained from an eyewitness while police are investigating a crime is discoverable (under § 1054.1), but the same statement is not discoverable if it is placed in the officer’s personnel file.  The trial court further abused its discretion by believing such statements are exclusively discoverable under § 1054.1.

Consequently, the Fourth Appellate District ordered the trial court to conduct an in-camera review of the witness statements and order such statements produced if they were not otherwise protected from disclosure on other grounds.  In short, the appellate court ordered the police to make the internal affairs witness statements available to Defendant, finding the police could not shelter the witness statements by placing the statements in a personnel file.
The permanent citation for the appellate court ruling at issue in this article is People v. Edward Rezek (2012) 206 Cal.App.4th 633, 141 Cal.Rptr.3d 891.
For more information about Pitchess motions and discovery in general, click on the following articles:
Contact Greg Hill & Associates