In convictions for felony murder, it is common for the jury to find true a special circumstance that defendant was a major participant and acted with reckless disregard for human life.

In a Nutshell: An SB 1437 Petition for Resentencing is not per se barred by a jury’s finding of a special circumstance in the murder, so petitioner is entitled to a hearing to see if the facts of the case fall under the standards set forth by Banks and Clark.

In 2015, the California Supreme Court issued its ruling in People v. Banks (2015) 61 Cal.4th 788 and a year later, it also issued a ruling in People v. Clark (2016) 63 Cal. 4th 522, construing the meaning of “major participant” and “reckless indifference to human life” in a significantly narrower, more restrictive manner than courts had previously.  People v. Torres (2020) 46 Cal.App.5th 1168, at 1179.
When a person was convicted of felony murder prior to Banks and Clark, with a true finding that defendant acted as a major participant and with reckless indifference to human life, there is an issue whether a jury would still find true the special circumstance under the new standards.
This is of great consequence due to the felony murder rule changing under Senate Bill 1437, which provides for vacatur of a defendant’s murder conviction and resentencing if the defendant was convicted of felony murder and defendant (1) was not the actual killer, (2) did not act with the intent to kill and (3) was not a major participant in the underlying felony who acted with reckless indifference to human life.  Penal Code § 189(e).
This issue has been addressed by several courts recently, as this website has summarized in recent articles.  The case of Reginald Ray York, a felony murder case out of the then-named Criminal Courts Building in 1994 (the courthouse has since been renamed as the Clara Shortridge Foltz Courthouse), poses this question again, with a fresh new response from the Second Appellate District Court (2020 DJDAR 9755).
His case and its appellate history therefore merit a closer look.  In 1994, York was convicted of first-degree murder under a felony murder theory of liability wherein there was a robbery.  The jury found true that York was armed with a firearm during the crime and was also convicted of two counts of kidnapping (Penal Code § 209), two counts of burglary (Penal Code § 459), one count of residential robbery (Penal Code § 211) and three counts of rape (Penal Code §§ 261(a)(2), 264.1 and 289).  The jury found true the special circumstance that the murder took place during the commission of a robbery.  He was then sentenced to life without the possibility of parole plus 22 years in state prison. 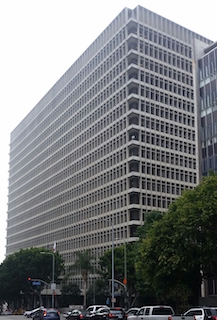 Clara Shortridge Foltz Criminal Courts Building Downtown LA
Twenty-four years after these convictions, Senate Bill 1437 was passed into law and York filed a petition for resentencing under Penal Code § 1170.95, arguing that his felony murder conviction would no longer be felony murder under the new, revised law.  Indeed, he was not the actual killer, however, it was certainly debatable if he acted with intent to kill and it was highly debatable whether he was a major participant in the underlying felony and acted with reckless indifference to human life.
The trial court judge summarily denied his petition without first appointing counsel and denying his petition, regardless, on the merits.
York appealed this ruling to the Second Appellate District, which agreed with York that the trial court erred in denying his petition by relying upon the special circumstance finding in the underlying trial.
The Second Appellate Court held that such a finding does not necessarily disqualify one from resentencing under 1437, but that the trial court needs to look to the facts more closely.
We find this ruling good, but suspect that the appellate court was being overly academic in its ruling.  The court explained that when a jury found a special circumstance true prior to Banks and Clark, the terms “major participant” and “reckless indifference to human life” had different meanings than when SB 1437 was passed, so no judge can find as a matter of law that such a special circumstance finding is per se disqualifying for relief.
Instead, the factual issues of the case must be evaluated to see if they meet the newer standards of Banks and Clark, although the appellate court seemed to suggest this should be done through a petition for a writ of habeas corpus, not a 1437 petition for resentencing.
We regard this ruling as good, but caution that since the newer standards under Banks and Clark are lower, we believe almost every case pre-Banks and pre-Clark wherein a special circumstance felony murder was found true insofar as being a major participant and acting with reckless disregard will satisfy the new standards as well.  Nonetheless, it is imperative that the analysis be done on an individual case basis because many years of a sentence may be removed.
The citation for the Fourth Appellate District Court ruling discussed above is People v. Reginald Ray York (2d App. Dist., 2020) 54 Cal. App. 5th 250, 268 Cal. Rptr. 3d 519.
For more information about issues, please click on the following articles:
Contact us.
Serving Torrance, Long Beach, Compton, Airport Courthouses and Other Courthouses.