In handling a capital case, especially when the evidence seems to strongly suggest defendant committed the crime, an attorney may feel he or she is on trial and not the client due to the automatic appeal that results if defendant is found guilty and sentenced to death.

Thus, as counsel, one must be exceedingly careful and document all research and time spent in conversations with the client, private investigators and experts.

The Gist of this Article: Ineffective assistance of counsel was found in a death penalty case wherein counsel delayed for 19 months in having private investigators interview exculpatory witnesses.  The California Supreme Court also was no doubt aghast at counsel’s lies to and manipulation of the client to be able to represent him.

This reality seems to have escaped or was never understood by then-attorney Daye Shinn, as explained by the California Supreme Court in reviewing the petition for a writ of habeas corpus filed by appellate counsel for Kenneth Early Gray in In re Kenneth Earl Gay (2020 DJDAR 1154) concerning his 1992 first-degree murder conviction for the 1983 shooting of a Los Angeles police officer following a traffic stop.  In reviewing Shinn’s performance, the Supreme Court granted habeas relief.

It should be noted from the outset that Mr. Shinn was a well-known attorney who represented Charles Manson-follower Susan Atkins in her 1970-1971 trial for the murder of actress Sharon Tate, so he was no novice when it came to representing Mr. Gray more than 20 years later.  Shinn later died in 2006.

It should also be noted for context that the conviction was first confirmed on automatic appeal, but then the death sentence was twice vacated on habeas petitions.  The most recent California Supreme Court ruling, now in 2020, addresses the underlying guilty verdict and found that Mr. Shinn’s representation of Mr. Gay constituted ineffective assistance of counsel (IAC), and in so doing, deprived Gay of his constitutional right to the assistance of competent counsel. 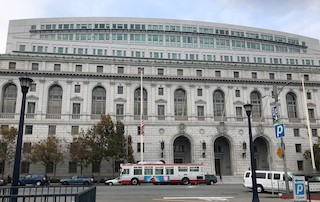 California Supreme Court San Francisco
The ruling by the California Supreme Court agrees with a 2015 referee’s finding that Shinn’s representation fell below the standard of reasonably competent counsel by failing to timely investigate potentially exculpatory witnesses, including police officers, and then present their testimony at trial, which would have corroborated Mr. Gay’s contention throughout that he was not the shooter, but it was his co-defendant Raynard Paul Cummings.

The ruling by the California Supreme Court seems to, from the outset, take a dim view of Mr. Shinn’s representation, explaining that Shinn had tricked Gay into retaining him by visiting him in the county jail by urging Gay to agree to let Shinn represent him because a group of unidentified (and in truth, nonexistent) Black businessmen would pay his legal fees.  Gay then agreed to let Shinn represent him.

Shinn later directed Gay to tell the judge, falsely, that his parents had paid a retainer fee to Shinn and would pay his legal fees.  Shinn then used this to discharge the public defender in order to engineer his eventual appointment as counsel by the court.

The California Supreme Court reviewed the underlying habeas relief order by beginning from the point of noting a petition for a writ of habeas corpus relief is a collateral attack on a presumptively final criminal judgment.  In so doing, petitioner bears the burden of proving by a preponderance of the evidence that he is entitled to the relief sought.  In re Cowan (2018) 5 Cal.5th 235, 243.

The court then explained that “[a]n ineffective assistance of counsel claim has two components.  A petitioner must show that counsel’s performance was deficient, and that the deficiency prejudiced the defense.”  Wiggins v. Smith (2003) 539 U.S. 510, 521; Strickland v. Washington (1984) 466 U.S. 668, 687.  Whether counsel’s performance was deficient, and whether any deficiency prejudiced defendant, are mixed questions of law and fact subject to independent review by the reviewing court.  In re Thomas (2006) 37 Cal.4th 1249, at 1256.

To establish deficient performance, a petitioner “must demonstrate that counsel’s representation ‘fellow below an objective standard of reasonableness’ as measure by ‘prevailing professional norms.’”  Wiggins, supra, at 521, quoting Strickland at 688.

When applying this standard, the judge will ask “whether any reasonably competent counsel would have done as counsel did.”  In re Reno (2012) 55 Cal.4th 428, 265.  Counsel’s performance “is assessed according to the prevailing norms at the time.”  In re Thomas, supra, at 1257.

In evaluating what Shinn did during the trial, the Supreme Court was especially critical of his delay in sending an investigator out to find and interview exculpatory witnesses, waiting literally until jury selection was underway 19 months after the murder took place and opening statements were only one month away.  Other alleged shortcomings were viewed by the Court as not necessarily deficient because the Court allowed that it could see some tactical purpose behind Shinn not doing something or doing something late or early.

We present this summary with great appreciation for the tireless efforts of appellate counsel in never giving up, even though nearly forty years passed from the date of the murder.
The citation for the California Supreme Court ruling discussed above is In re Kenneth Earl Gay (2020) 8 Cal. 5th 1059, 258 Cal. Rptr. 3d 363, 457 P. 3d 502.
For more information about ineffective assistance of counsel, please click on the following articles:
Contact us.
Serving Torrance, Long Beach, Compton, Airport Courthouses and Other Courthouses.