If you are not a U.S. citizen and you face a criminal case, it is wise to know if the charges you face are considered aggravated felonies, a crime of moral turpitude (CIMT), a controlled substance offense, firearm offenses or a domestic violence offense.  A conviction for any one of these crimes could have adverse immigration consequences.

Brief Synopsis: A conviction in California state court may be considered an aggravated felony under federal immigration law, resulting in that person, if not a U.S. citizen, being deported, removed or subject to exclusion / denied naturalization.   This article contains a list of some of more common aggravated felonies, which can include certain misdemeanors.

Even a DUI with injuries to others or a “wet reckless” can have adverse immigration consequences if one is not a U.S. citizen, so it is wise to speak with an experienced criminal defense attorney before agreeing to a wet reckless because one believes it is superior to a conviction for DUI.  It may not be for so for a non-citizen.
Likewise, convictions for stalking, domestic violence, child abuse, sales of a controlled substance and transportation of a controlled substance must be handled with care and alternative resolution strategies, i.e., pleading to other offenses that avoid such immigration consequences must be considered, even if the terms of the plea bargain are more difficult.
By entering a plea, as part of a plea bargain, you will be asked by the judge if you have had an adequate opportunity to discuss the plea and its immigration consequences for you specifically (not just generally for someone).  If you state that you have had such an opportunity and wish to proceed, the judge will agree to accept your plea and find that it was entered knowingly, voluntarily and intelligently. 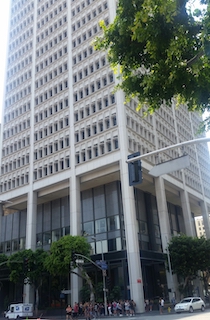 Immigration Court Downtown LA
Any conviction of a non-citizen to an “aggravated felony” will result in removal/deportation, exclusion, and / or denial of naturalization (see 8 U.S.C. § 1227(a)(2)(A)(iii); Esquivel-Quintana v. Sessions (2017) 137 S. Ct. 1562, 198 L. Ed. 2d 22).
It is good to know that certain offenses defined as misdemeanors under California law may be considered “aggravated felonies” under federal law.
Aggravated felonies include, but are not limited to:
Other crimes, as defined by federal law, that may result in removal / deportation, exclusion, and /or denial of naturalization of other severe immigration consequences include, but are not limited to:
For more information about aggravated felonies under federal immigration law, please click on the following articles:
Contact us.
Serving Torrance, Long Beach, Compton, Airport Courthouses and Other Courthouses.