About This Article Briefly: The time for a Youth Offender Parole Hearing depends upon the age of the offender at the time of the offense and the term of the sentence for the “Controlling Offense” (the term with the longest sentence).  This article covers the most common sentences and when such a hearing will be scheduled.

Such a hearing is many years after the young man or young woman begins his or her prison sentence.  This may seem unfair, but there are two good reasons why years must pass before such a hearing can be held,  First, one certainly must “pay one’s debt to society” by serving a significant portion of time and hopefully, to become less of a danger to others.  As with anyone eligible for parole, public safety is a big concern.

Second, a great deal of relatively recent research has revealed that youth offenders often commit such crimes because parts of the brain responsible for behavior control (i.e., the hypothalamus, among other parts) are still developing up until one reaches 26 or so, meaning behavior as a youthful offender is often heavily influenced by peer pressure, emotional immaturity, impatience and other outside factors that have less influence as one gets older.  The youthful person also often has little or even no appreciation for the gravity of what crimes they are committing.  However, youth offenders have the capacity to change, so the parole hearing is after many years in custody to allow the inmate ample opportunity to change, if in fact that person does.

Penal Code § 3051(b) sets forth when such a hearing must be held.  It depends upon the age of the youth at the time of the offense and the term of the “Controlling Offense” (the offense or sentencing enhancement with the longest term, often 25 years to life).  The controlling offense is not affected by consecutive sentences, i.e., 25 to life, consecutive to another sentence of 25 to life (this is a new provision under the Youth Offender Parole Law).  In such a situation, the controlling offense term would be 25 years. 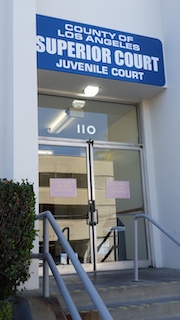 Juvenile Court Sign by Inglewood Juvenile Court
If one is sentenced to a determinate sentence (not indeterminate or life), that person is eligible for a Youth Offender Parole Hearing after completion of 14 years in custody, or during his or her 15th year in custody.

Youth offenders sentenced to life with the possibility of parole with a controlling offense term of less than 25 years to life are eligible for a Youth Offender Parole Hearing after 19 years of custody, or during his or her 20th year in custody.

Inmates sentenced to a controlling offense term of twenty-five years to life or longer (i.e. 30 years to life, plus 10) are eligible for a Youth Offender Parole Hearing after 24 years of custody or during the 25th year of custody.

Inmates who committed their controlling offense when under age 18 and who received a sentence of life without the possibility of parole (LWOP) are eligible for a Youth Offender Parole Hearing after 24 years in custody, or during the 25th year in custody.  This is a new provision, made possible through the passage of Senate Bill 394.

Time in custody includes all time in juvenile hall, jail, a mental health facility and/or CYA.

Six years prior to a parole hearing, the inmate will be scheduled and have a “Consultation,” which is a one-on-one meeting with a person from the Bureau of Parole Hearings.  At this meeting, the representative of the BOPH will tell the inmate what they need to do to be ready for parole and their parole hearing.  The Consultation will be scheduled automatically.  One does not need to request it.  The inmate is not entitled to have an attorney present at the Consultation (but one can have an attorney at the Youth Offender Parole Hearing, either appointed or privately retained).

Interestingly, one can waive the right to a Youth Offender Parole Hearing for 1, 2, 3, 4 or 5 years.  To do so, one must submit a signed Form 1101 no later than 45 days prior to the scheduled hearing date.

Lastly, one can postpone such a parole hearing, but this is usually for three to six months.
For more information about Youth Offender Parole Hearings and state court habeas proceedings, please click on the following articles:
Contact us.