Home
Other Information
Criminal Defense Articles
I Visited Someone in Jail - What Do the Shirt Colors Mean?

I Visited Someone in Jail - What Do the Shirt Colors Mean?

So you visited someone in jail and saw other folks in custody in a variety of shirt colors and with certain coded wristbands?  Maybe the person you visited was wearing a different shirt color than the others and had a special letter on his wristband and you felt awkward asking what these colors and codes meant.

The Reader’s Digest Version:  The shirt color of a person in custody designates special status or handling if other than dark blue.  If the person has a colored wristband, the coding on it has special meaning, too.  To read about what the colors and coding means, read this article.

This article is meant to explain as much of this mystery as possible so your next visit is more comfortable.

The general population of the Los Angeles County Jail wears a dark blue “blouse,” or shirt.  It has a small pocket at the left breast and the shirt is quite loose fitting, to allow it to fit the greatest number of people.

A trustee, a coveted position of trust with the jail deputies, wears a light green shirt.  One who has revealed that he or she leads an “alternative lifestyle” is fitted with a light blue shirt.  This may be someone who is gay, lesbian, bisexual, etc.

What Do Certain Tattoos Mean:  A person with a 13 tattooed on their hands, neck, face or arms (often in blue or grey) signifies someone who identifies himself as a Southerner or “Sureno.”  A person with a 14 similarly tattooed (often in red) signifies someone who identifies himself as a Northerner or “Norteno.”  The Surenos and Nortenos are well-established rival criminal street gangs, mostly from Mexico and El Salvador.  The dividing line between North and South is generally Bakersfield or Delano.  Nortenos identify with Nuestra Familia and the Sinaloa Cartel while Surenos identify with the Mexican mafia.

Someone wearing a dark brown shirt has a physical condition under medical care.  It may be a broken leg or a heart condition or kidney problem, for example.  A juvenile will wear an orange shirt.  A worker at a court will wear a white shirt.  Someone held in contempt of court (a judge) will be fitted with a red shirt.

The various wrist bands that prisoners wear are also significant and have certain meanings, if the shirt color is not a clue enough. 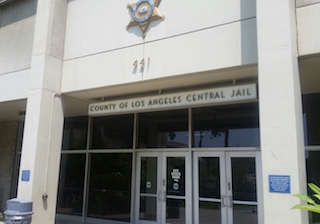 Men's Central Jail Los Angeles
Any prisoner who is identified for special handling will have the letter “K” on a red wristband.  “K” generally means “keep away,” as in segregate from the general jail population.  “K-1” on a wristband is for inmates that are segregated as a group from all other inmate classifications.  These are inmates with a family member in law enforcement that might be vulnerable to retaliatory attacks by other inmates or who have a significant relationship to law enforcement agencies.
The “K-9” designation is for informants only.  K-9 inmates are kept together.  This person wears a red wristband with K-9 on it.

The “K-10” designation, also on a red wristband, is reserved for protective custody inmates who require single-man cells, suspected or confirmed prison gang member dropouts.  These groupings are highly regulated and must be approved by the jail.  A K-10 designation can also be used for a sexually violent predator (SVP), who is someone convicted previously of a serious sexual offense and served time in a state prison for that offense.  To be designated an SVP, a jury must determine this.  Often, such an SVP is in county jail awaiting an appearance in Department 99 of the Los Angeles Superior Court, where he or she is evaluated for being a continuing danger to the community.

A person with an “E” on their wristband is an escape risk inmate, reserved for someone who has attempted to escape or has actually escaped from a maximum security jail or is seen as having a high potential to escape.  This may be because he or she escaped from court services transportation or court, escaped while on inmate worker status, is a “walkaway” from a halfway house, or who failed to comply with electronic home monitoring or house arrest.

Lastly, there is the “H” designation, which is for an inmate who is deemed highly dangerous.  This may because the person assaulted a police officer or other inmates.

Other inmates wear blue wristbands.  Someone with a blue wristband with an “A” on it is designated so for being part of a “hand cuff cover system.”  This may be a high security prisoner.

Orange bands are for juveniles.  Yellow wristbands are for inmates with medical problems or communicable diseases.  White wristbands are for the general population, but can also be for folks with no bail or keep aways that have K-7 on their band to show they are South Side gang members.  K-8 on the wrist means the person is a Maravilla gang member.

Purple bands are for inmates charged with Penal Code § 187 (murder) or someone who has or is facing two or more strike convictions.

Someone wearing a green wristband is someone with bail of one million dollars or more and who is involved with drug charges or drug conspiracy charges.  This person receives “keep away” handling.

A person with a “T” on their wristband just means the person requires special handling during transportation.

Someone with an “S” on their wristband means the person has made suicide attempts, claims to be suicidal or who jail staff thinks may become suicidal.

Someone with an “M” on their wristband is someone who is suffering from a mental disorder and does not seem to be physically dangerous, but could commit an assault.

Someone with a “D” on the wristband is consider dangerous because the person may have physically fought with other inmates or who staff at the jail believes may become dangerous.