This is a common question our office hears, especially in theft offenses.  The answer to this article’s title question is “it matters.”

Summary in 50 Words or Less: There is no rule or law that definitively determines if three crimes committed in a short time leads to one case and one charge or three different cases.  The answer depends upon the specific facts of the crimes, the similarity in victim(s), the type of crime and the location(s). 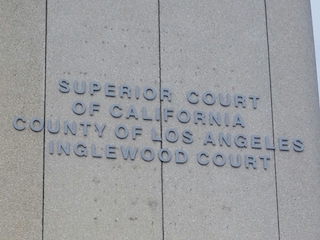 Inglewood Courthouse
This is not always logical.  Where in one transaction a used car dealer fraudulently trades a 1949 Ford that he does not own for the victim's 1946 Ford and cash there is only one grand theft, not two.  People v. Nor Woods (1951) 37 Cal.2d 584, 586, 233 P.2d 897.   This makes logical sense insofar as there was one transaction, but it created thefts from two different people.
In People v. Bailey (1961) 55 Cal.2d 514, 518-519, 11 Cal.Rptr. 543, 360 P.2d 39, the one transaction rule seemed irrelevant.  In Bailey, defendant received a series of welfare payments in sums less than $200 from July 1956 to December 1957.  The California Supreme held that the defendant could be convicted of one count of grand theft instead of multiple counts of petty theft where the money was obtained under a single plan.

In People v. Gardner (1979) 90 Cal.App.3d 42, 48, 153 Cal.Rptr. 160, the Court of Appeal followed Bailey, and reversed three of the defendant's convictions of violating Penal Code section 487a (grand theft) where the defendant had had removed hogs carcasses during a single episode under one plan.  Similarly, in People v. Bowie (1977) 72 Cal.App.3d 143, 140 Cal.Rptr. 49, the defendant sold an informant 11 blank checks at one time.  The Court of Appeal reversed 10 of the defendant's 11 convictions of violating Penal Code 475, which prohibits the possession of blank checks with the intent to fill up the checks so that they can be passed to defraud another person.  The court held that there was only one offense, not eleven.

Even if the defendant is charged with multiple counts of Penal Code section 475a for possessing completed checks with the intent to defraud, the result is the same. People v. Carter (1977) 75 Cal.App.3d 865,142 Cal.Rptr. 517.

Bowie was later followed in a sex offense case, People v. Municipal Court (Marandola) (1979) 97 Cal.App. 3d 444, 447, 158 Cal.Rptr. 739, where the court of appeal held that instead of being charged with 15 counts of violating Penal Code § 311.2, a defendant who delivered seven obscene films to undercover officers on one day, and eight obscene films on another day, could only be charged with two counts of possessing obscene films.  In People v. Harris (1977) 71 Cal.App.3d 959, 971,139 Cal.Rptr. 778, eight counts of possessing items with removed serial numbers were reversed.

The Doctrine of Fragmentation is not limited to crimes of possession and theft.  When it comes to interfering with a peace officer in violation of Penal Code § 148, an act against two officer supports one count only. People v. Jordan (1971) 19 Cal.App.3d 362, 370-371, 97 Cal.Rptr. 570. "One who by his act interferes with the law enforcement activity of a 500-member police riot squad does not commit 500 offenses, separately chargeable." 19 Cal.App.3d at p. 371.

Likewise, in People v. Garcia (2003) 107 Cal.App.4th 1159, 32 Cal.Rptr.2d 694, the court held that a defendant who was charged with three counts of evading an officer in violation of Vehicle Code section 2800.2, because he engaged in a high-speed chase in which he was pursued by three police cars could only be convicted of one count.