How is “Personal Infliction” Defined? Examples?

As the reader of this website may be aware, many enhancements for a sentence include a requirement that defendant “personally inflict” great bodily injury or that the injury result from the “personal infliction” of harm by defendant.  The most common sentence enhancement, Penal Code § 12022.7 (five subparagraphs, (a) – (e)) does, as does Penal Code § 1192.7(c)(8) (a prior serious felony).

Summary in 50 Words or Less: In the context of a great bodily injury sentence enhancement being considered, “personal infliction” is defined as being directly caused (not through an intermediary) to be endured by another person, or failing to act to prevent an injury or harm when a duty to act is imposed.

What exactly does “inflict” mean?  What does “personally” mean in this context?  The legal meaning does not differ too much from its nonlegal meaning.  “Personally inflicts” means that someone “in person,” that is directly and not through an intermediary, “causes something (damaging or painful) to be endured.” People v. Cross (2008) 45 Cal.4th 58, 68 (defendant’s facilitation of abortion for 13-year-old stepdaughter he impregnated was not “personal infliction” in that he did not perform the medical procedure); but see People v. Frazier (2009) 173 Cal.App.4th 613, 618 (defendant personally inflicted great bodily injury on victim when she commanded dog to attack victim; dog was instrumentality of crime, similar to gun or knife).
Other courts have insisted that defendant must “directly, personally, himself inflict the injury” (People v. Rodriguez (1999) 69 Cal.App.4th 341, 349 (defendant did not push, struggle or initiate contact with officer who injured self when tackling defendant)), rather than be the proximate cause of the victim’s injuries (People v. Cardenas (2015) 239 Cal.App.4th 220, 228 (circumstantial evidence supported jury’s finding defendant personally inflicted injury on victim who could not identify how she sustained injuries)). 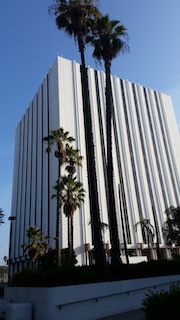 Compton Courthouse
The scope of “personal infliction” includes a failure to act when action is required.  People v. Warwick (2010) 182 Cal.App.4th 788, 795 (defendant’s failure to swaddle or seek help for newborn led to hypothermia and near death).
Moreover, an accidental nature of an injury does not seem to absolve a defendant of responsibility for personally inflicting the injury.  People v. Elder (2014) 227 Cal.App.4th 411, 421 (defendant’s volitional act of struggling and pulling away was a direct cause of victim’s dislocated finger (which can be great bodily injury)).
The enhancement for personal infliction of great bodily injury only applies to the person who directly acted to cause the injury or who directly performed the act that causes the physical injury to the victim.  People v. Cole (1982) 31 Cal.3d 568, 572.  There is no vicarious or aiding an abetting liability under Penal Code § 12022.7 for one who does not, himself or herself, inflict the injury.  People v. Magana (1993) 17 Cal.App.4th 1371, 1380.
When defendant is among a group of people that are involved in an assault and it is not possible to determine which individual caused which injury, “the defendant may be punished with a great bodily injury enhancement if his conduct was of a nature that it would have caused the great bodily injury suffered.” People v. Corona (1989) 213 Cal.App.3d 589, 594 (rejecting Cole-based defense that Penal Code § 12022.7 could not be found in group beating of two men when it was impossible to determine who inflicted injuries).  See also In re Sergio R. (1991) 228 Cal.App.3d 588, 599.
The definition of “personal infliction” was further clarified in the context of group violence by People v. Modiri (2006) 39 Cal.4th, 481, wherein the California Supreme Court analyzed the phrase “personal infliction of great bodily injury” found in Penal Code § 1192.7(c)(8) and the accuracy of CALJIC 17.20.  The trial court had given the jury CALJIC 17.20, which said that when a person participates in a group beating and it is not possible to determine which assailant inflicted a particular injury, he or she may be found to have personally inflicted great bodily injury on the victim if:
Modiri, supra, at 485.
For more information about sentencing enhancements based on injuries, please click on the following articles:
Contact us.
Serving Torrance, Long Beach, Compton, Airport Courthouses and Other Courthouses.