Home
Other Information
Criminal Defense Articles
How Does the Private Search Doctrine Help the Police?

How Does the Private Search Doctrine Help the Police?

The Reader’s Digest Version: The Private Search Doctrine allows the police to accept evidence discovered by a private party who searches an area or a person.  The private party is not a government actor or agent, so there is no Fourth Amendment right against an unreasonable search from the private party.  Moreover, a government actor can search the same area without a warrant as long as the search does not exceed the scope of the initial private search.

If a government search is preceded by a private search, the government search does not implicate the Fourth Amendment as long as it does not exceed the scope of the initial private search.  United States v. Jacobsen (1984) 466 U.S. 109, 115-117; see Walter v. United States (1980) 447 U.S. 649, 657.
In Jacobsen, Fed Ex employees opened a package which had been damaged in transit.  Jacobsen, supra, at 111.  The employees inspected the torn package and cut open a tube found inside and discovered plastic bags containing a suspicious white powdery substance.  Id., at 111, 115.  The employees then repackaged the shipment’s contents and contacted federal law enforcement agents with the Drug Enforcement Administration (DEA).  The agents then came to inspect the white powdery substance and identified it as cocaine. 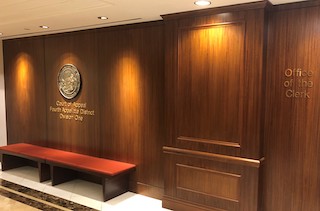 Fourth Appellate District Court of Appeal Div 1 San Diego
The defendant challenged the agents’ opening of the package and testing of the powder as a warrantless search in violation of the Fourth Amendment.  The U.S. Supreme Court then found there was no violation of the Fourth Amendment because the DEA search did not exceed the scope of the search by Fed Ex employees.  The testing of the substance was not a Fourth Amendment violation.
Applying this “private search doctrine” to electronic searches, the recent published decision of People v. Luke Noel Wilson (2020 DJDAR 11335) is a significant victory for the government in its fight to control the distribution of child pornography.
Wilson was convicted in San Diego Superior Court of oral copulation of a child ten years old or younger (Penal Code § 288.7(b)) and three counts of committing a lewd act upon a child (Penal Code § 288(a)).  The jury also found true that two counts were committed against more than one victim (Penal Code § 667.61(b), (c) and (e)).  The judge sentenced Wilson to an indeterminate prison term of 45 years to life.
Wilson appealed on nine grounds, but this article will only consider his argument that the judge erred in denying his motion to suppress evidence, which addressed Google’s discovery of child pornography in e-mail attachments Wilson distributed to others using Gmail and then alerting government agents who then reviewed such evidence.  Wilson argued that the “private search doctrine” did not apply; the judge disagreed.
Some background information is helpful to understanding the facts of this case.  The Fourth Appellate District explained that the Google Terms of Service specify that users may only use the Google services “as permitted by law.”  Google informs users that it “may review content to determine whether it is illegal or violates our policies, and we may remove or refuse to display content that we reasonably believe violates our policies or the law.”
Google took steps to ensure its systems were free of illegal content, particularly child sexual abuse material.  Since 2008, Google has used a screening process utilizing a proprietary “hashing” technology to identify apparent sexual abuse images on its services.  Trained Google employees use software to generate a “hash” value for any image file they find depicting child pornography.  The hash value is generated by a computer algorithm that is considered unique to the computer file.  Salgado, Fourth Amendment Search and the Power of the Hash (2005) 119 Harv. L. Rev. 38, at 39.  The resulting hash values are added to a repository.  The repository therefore contains hash values, not the actual child pornography images.
When a user uploads new content to its services, Google automatically scans and generates hash values for the uploaded files and compares those hash values to all know hash values in the repository.  If Google’s system detects a match, the system generates a report to the National Center for Missing and Exploited Children (MCMEC) in the form of a Cybertip.  In some cases, Google sends the report without opening the image file, while in other cases, a Google employee opens the image for manual review to confirm it contains apparent child pornography.
In June 2015, Google’s system identified four image files, each with hash values matching values for apparent child pornography images in its repository, attached to the e-mail account belonging to Wilson.  Google generated a Cybertip to MCMEC identifying and forwarding the four images.  When MCMEC received the tip, they forwarded it to the San Diego Internet Crimes Against Children (ICAC) task force after it determined the account was in San Diego.
The ICAC task force is an office comprised of individuals from multiple agencies, including the federal Department of Homeland Security and local law enforcement.
An ICAC investigator then obtained a warrant to obtain from Google all content and user information from Wilson’s account, and later his computer, apartment and vehicle.  There, at his apartment, they found thousands of images of child pornography.
Wilson then sought to suppress this evidence, arguing that the warrantless search of his e-mail attachment was illegal and therefore all evidence in his e-mails and then at his apartment had to be suppressed.
The San Diego County judge hearing the motion denied it and the Fourth Appellate District affirmed.  Both courts found that law enforcement merely repeated the search performed by Google, which Wilson consented to in having a Gmail account.
The citation for the Fourth Appellate District Court ruling discussed above is People v. Luke Noel Wilson (4th App. Dist., 2020) 56 Cal. App. 5th 128, 270 Cal. Rptr. 3d 200.
For more information about the Fourth Amendment, please click on the following articles:
Contact us.
Serving Torrance, Long Beach, Compton, Airport Courthouses and Other Courthouses.