Home
Other Information
Criminal Defense Articles
How Can I Get Dirty Cop Records More Than 5 Years Old?

How Can I Get Dirty Cop Records More Than 5 Years Old?

The Reader’s Digest Version: Under a federal due process right under Brady v. Maryland, one may be able to have a judge order production of police officer personnel files more than five years old as is otherwise limited in Pitchess and Penal Code § 1045(b)(1).

Under Evidence Code § 1045(b)(1), citizen complaints in the personnel file about a specific police officer made more than five years before a later event are expressly precluded from disclosure.  This is the general law that judges follow in ruling on a “Pitchess motion” (Pitchess v. Superior Court (1974) 11 Cal.3d 531).

However, in the case of City of Los Angeles v. Superior Court (Brandon) (2002) 29 Cal.4th 4, the California Supreme Court reversed the Second Appellate District Court of Appeal after it upheld the trial court’s order directing the production of the personnel records of two officers involved in the year 2000 arrest of Defendant Jeremy Brandon.  Brandon was charged with sexually molesting a seven-year old boy (Penal Code § 288(a)), as well as failing to register as a sex offender (Penal Code § 290(g)(2)) and sought information in the personnel records of the two Los Angeles Police Department arresting officers.

While the California Supreme Court reversed the Second Appellate District Court of Appeal and the trial court in Los Angeles Superior Court, the opinion is valuable to understand for one seeking personnel records going back more than five years of an arresting officer.
It is helpful to understand the underlying facts of the Brandon case and his request for the personnel records going back more than five years.  Mr. Brandon, in 1992, had been convicted of child molestation.  In 2000, he was arrested by two officers on suspicion of molesting a seven year old boy.

Brandon filed a Pitchess motion requesting information in the personnel files of the two arresting officers, specifically the names, addresses, and telephone numbers of persons who had filed complaints against the officers "relating to acts of falsification of police reports, lying, perjury, dishonesty, untruthfulness or other acts of moral turpitude that reflect on the officers' honesty or truthfulness." 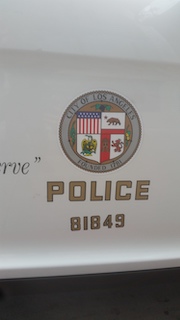 LAPD Car
Mr. Brandon’s counsel's accompanying declaration stated that Brandon "may" assert as a defense to the charges "that the civilian witnesses in this case were coached as to the statements and testimony they should make" and that this "coaching was done in an effort to fabricate evidence against the defendant and to suborn perjury."  In asserting entitlement to this information, defendant cited this court's decision in Pitchess, supra and the United States Supreme Court's decision in Brady v. Maryland (1963) 373 U.S. 83.  Defendant served the motion properly on both the district attorney and the LAPD.

The District Attorney did not respond or oppose the motion, but the attorney for the LAPD did.
The LAPD custodian of records brought records to the judge for his review.  These included documents from the personnel records of both officers.  These materials included an internal report regarding a 1996 complaint against one of the arresting officers, alleging that he had failed to report a fellow officer's assault on a prisoner.

The 1996 report referred to a 1990 incident involving that officer’s failure to report the improper use of mace by a partner officer. The judge found the information about both the 1996 and the 1990 incidents "relevant" to Brandon’s case, and ordered the LAPD's custodian of records to provide Brandon’s attorney the names, addresses, and telephone numbers of the complainants and witnesses for the two incidents.

The City of Los Angeles  representing the LAPD, sought reconsideration, arguing the 1990 complaint predated the arrest in this case by 10 years and thus fell outside the five-year window of Evidence Code § 1045(b)(1).  The trial court judge denied the motion for reconsideration.
The City of Los Angeles then took the matter up to the Court of Appeal for the Second Appellate District.  This appeal was denied.

The City then took the appeal up to the California Supreme Court, which reversed in the City’s favor.  However, the ruling suggested that production of such records going back ten years, while expressly barred by 1045(b)(1), could be permitted under a federal due process right to a fair trial under Brady, supra, which requires the prosecution to disclose evidence that is “favorable and material” to the defense on the issues of guilt or punishment without limitation to any five-year window.

The Brandon court held that 1045(b)(1)’s five-year limitation is not an absolute bar to production of records more than five years old.  The California Supreme Court explained, “the reason is this: Our state statutory scheme allowing defense discovery of certain officer personnel records creates both a broader and lower threshold for disclosure than does the high court's decision in Brady, supra, at 373 U.S. 83.

Unlike Brady, California's Pitchess discovery scheme entitles a defendant to information that will "facilitate the ascertainment of the facts" at trial (Pitchess, supra, 11 Cal.3d at p. 536), that is, "all information pertinent to the defense" (City of San Jose v. Superior Court (1993) 5 Cal. 4th 47, 53.).

The California Supreme Court went on to note that it “undisputed” that materials that "may be used to impeach a witness" fall within the class of information subject to Brady because impeachment information affects the fairness of trial.  However, in the Brandon case, the materials more than five years old did not serve to do this.

Nonetheless, the California Supreme Court suggests that in the right situation (Brandon was not), such materials could be ordered produced under the federal standard described by Brady even if relating to citizen complaints more than five years old.
For more information about issues, please click on the following articles:
Contact us.
Serving Torrance, Long Beach, Compton, Airport Courthouses and Other Courthouses.