Home
Other Information
Criminal Defense Articles
How Can I Challenge a One-Person Showup That Identified Me?

How Can I Challenge a One-Person Showup That Identified Me?

Sometimes, a witness to a crime, or a victim, will call 911 and describe to police the suspect, who may have left the scene.  Police will respond to the location and detain an individual meeting the description.  The police may then bring the detainee to show the caller and verify that the person described as the suspect is the person detained.  This is called a one-person showup or “cold shows” by police.

The Gist of this Article: Challenging a “one person” show up, wherein a victim or witness is asked to confirm a person is the suspect, can be impermissibly suggestive, especially if the suspect is made to wear clothing that he was not found wearing, or it can be ambiguous, wherein the suspect is not brought close enough to the victim or witness to allow a reliable view.  The lighting may also be poor.

The one-person showup is intended to allow identification of the suspect while the memory of the victim or witness is fresh and is rationalized by police as a way to exonerate persons detained near the crime scene.  People v. Rodriguez (1987) 196 Cal.App.3d 1041, 1049, 242 Cal.Rptr. 386.

It is important to understand from the outset that there is no right to counsel at a one-person showup held promptly between an apprehended suspect and witness(es) or victim(s) at or near the scene of the crime.  In re Richard W. (1979) 91 Cal.App.3d 960, 971, 155 Cal.Rptr. 11.

However, that does not mean that the officer has unbridled discretion to apprehend anyone and bring him or her to the witness or suspect for identification. 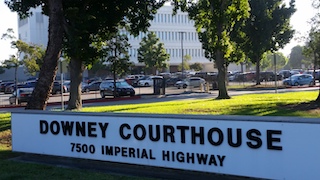 Downey Courthouse
There are three broad areas for contesting the showup.

First, the officer must reasonably believe that there was some criminal conduct taking place, happened or was about to take place and that the suspect was connected with that activity.  The officer’s suspicions must be objectively reasonable.  Rodriguez, supra, at 1047.

Second, to then transport that suspect to the crime scene, the officer must have probable cause to believe the suspect is responsible for the criminal activity at issue.  People v. Harris (1975) 15 Cal.3d 384, 389, 124 Cal.Rptr. 536.  “Transportation detention” impermissibly violates the detainee’s constitutional rights because “ordinarily there exist less intrusive and more reasonable alternatives to pre-arrest transportation.”

However, there are situations were transportation is reasonable.  See, e.g., In re Carlos M. (1990) 220 Cal.App.3d 372, 383, 269 Cal.Rptr. 447 (transportation of two rape suspects to hospital where victim was being treated was reasonable in circumstances and identification was not impermissibly suggestive); People v. Courtney (1970) 11 Cal.App.3d 1185, 1191, 90 Cal.Rptr. 370 (officer transported suspect to station for investigation because of hostile crowd).