Our client, age 87, owned a two story, commercial building in the Hollywood area that he rented out to several tenants.  He had owned the building for over forty years.  It was a source of income for him to supplement his social security checks.  The building included a basement, which he rented out to an acting school.  The building was old, but functional.  Yet it certainly had some delayed maintenance that our client had been meaning to address for years.

In a Nutshell:  Hollywood, thirteen counts of municipal code violations relating to fire hazards, case dismissed for inspection fees only, no conviction on our client’s record.

One day, a water pipe in the building’s basement burst.  When the building occupants were unable to isolate the pipe by turning off up-flow spigots, they called the Los Angeles Fire Department, who arrived within minutes.

The LAFD tried to secure the water main, but the handle to the shut-off valve was so rusted that it broke off as it was turned.  Water continued to flood the basement, turning the basement into a swimming pool.

Finally, the LAFD did secure the water source, but not until the basement was flooded with three feet of water and the LAFD observed over a dozen other building code violations relating to fire hazards in wiring.  The fire exit signs were also inoperable.  There were electrical cords being used as permanent electrical conduits while stapled to the ceiling.  There were inoperable fire extinguishers and, even if they were operable, there were not enough fire extinguishers.  There were no smoke detectors at all.  The building also did not have a proper permit for use of the building by an acting company.  Things were not good.

The LAFD performed an inspection of the building after the excess water was removed and gave our client a report with a list of deficiencies to correct, as well as a bill of $3,750 for their inspection.  Instead of correcting the problems, however, our client sold the building and failed to pay the fees.

The City of Los Angeles then notified our client of the problem and our client responded by saying he no longer owned the building, which was not true according to public records.  However, our client was in the process of selling the building, but the buyer had not taken title yet. 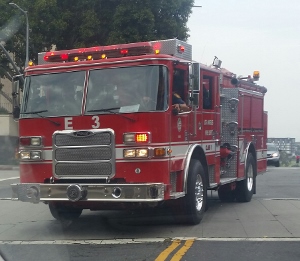 Our client then agreed to pay the inspection fees up to avoid trial and a conviction.  Moreover, he was quite frail and did not want to come to court at all.  His wife was bedridden and our client needed to stay at home to help his wife.

Had our client gone to trial and been convicted, which seemed certain due to the overwhelming evidence, our client would have had to pay the City Attorney’s legal fees, $5,000 for each of the municipal code violations (thirteen in total), interest on the fines, the fire inspection fees, costs of trial and the prosecution’s witness fees (approximately $15,000, it was estimated).

Our client was happy to pay the minimal inspection fees and avoid the massive financial consequences that a trial could create.  Since he was on a fixed income and trying to preserve as much money as he could for medical expenses attributable to his wife, he appreciated the resolution all the more.