Our client had grown up in Florida, but always dreamed of becoming a movie star.  He researched the various acting schools in Hollywood, California and figured out a plan to travel by himself from Florida to Hollywood to become a star.  His single mom supported this dream.
When he turned 21, he boarded a bus with two duffel bags and headed West to Hollywood.  He had found a room in a house to rent and was quite excited.  The monthly rent was not too high and he was living with other aspiring actors, so he anticipated learning more about how to find auditions and meet those who hire for such jobs.
After about a week at the house, our client realized that the other people in the house were actors in gay pornographic movies and they told him that he had to also act in such movies.  Our client refused and called the police, who did not respond at all.
A few days later, with constant pressure from the folks in his house and not finding anywhere else to live, our client called his mom in Florida and told her he was returning to Florida.
However, the other occupants of the house would not let him back in the house to pack up his belongings, so our client called the police again, who again did not respond.
Desperate for help, our client went to a McDonald’s on Sunset Boulevard and allegedly, began yelling at customers.  Our client did not buy any food or a drink there, so he was not a customer.  He was indeed frustrated and confused.  The manager of the McDonald’s told our client to leave and our client responded, “I refuse to leave.  McDonald’s is a family friendly place, so I am staying here.  I feel safe here.”  When the manager again asked him to leave, he told her “shut the fuck up, bitch.”
The security guard at the McDonald’s tried to escort our client from the McDonald’s and our client ran to the restroom, where he locked himself inside.
Finally, the restaurant called the Los Angeles Police Department, who came, handcuffed our client and took him away from the store.  Our client, allegedly hysterical, fought with the police, causing cuts to the hands of one officer and a bruise to another officer. 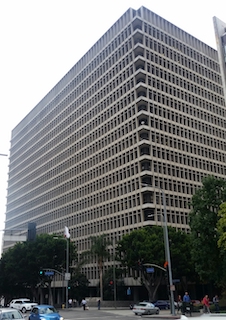 Clara Shortridge Foltz Criminal Courts Building CCB Los Angeles
He was booked on charges of trespassing (Penal Code § 602(m)) and two charges of obstructing, delaying or resisting arrest (Penal Code § 148(a)(1)).  All three charges were misdemeanors.
After being booked, he was released after signing a promise to appear in about six week in Los Angeles Superior Court (Clara Shortridge Foltz Courthouse) and, only then, did he return to home in Florida, vowing never to return to California again.
The client’s mom then called Greg Hill & Associates and spoke with Greg about her son’s pending criminal case.  She described what her son told her happened and how important it was that the case be dismissed with no conviction because her son wanted to join the Navy now.
Greg listened and explained that if two police officers were injured (even if minor injuries) when the client obstructed or delayed arrest, prosecutors usually file a case, which the mom understood.  Greg further explained that such cases were generally handled by the Los Angeles City Prosecutors office, so an office hearing might be possible.  Greg then explained what an office hearing was and the mom asked if Greg could promise such a hearing if he was retained.  Greg answered that he could not promise such a hearing, but he would certainly request this.
Greg then prepared a letter to the Los Angeles Police Department, requesting the police report, as well as a letter to the Los Angeles City Attorney’s Office, requesting the police report as well, but also suggesting the case resolve via an office hearing.
The date for the arraignment then arrived without a referral to an office hearing and Greg appeared on the client’s behalf in court.  The first offer from the Los Angeles City Attorney’s Office involved 120 days in county jail and a plea to both trespassing and one count of obstructing / delaying and resisting arrest.  The client would also be required to take anger management classes and be placed on three years of informal, or summary, probation.
Greg communicated this offer to the client and his mom, who both were shocked at such an offer.
Greg continued negotiated on the client’s behalf, eventually resolving the case for 36 month of informal probation, no jail and just a promise to stay away from the McDonald’s in question over 3,000 miles away from the client’s home in Florida.  The client still had to pay $220 in court fees, but his was acceptable to the client and his mom.
For more information about resisting arrest, as well as delaying or obstructing a police officer, please click on the following articles:
Contact us.
Serving Torrance, Long Beach, Compton, Airport Courthouses and Other Courthouses.