Our client, age 21 and with no prior criminal history, was walking home from a Hermosa Beach bar with his friends and felt the need to urinate.  It was after the bars had closed, so he could not go back to one to ask to enter and use the restroom inside.  Instead, he found a dark area of an alley and relieved himself. 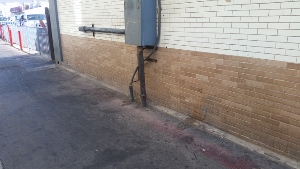 Hermosa Beach Alley
As if hiding in the shadows, a Hermosa Beach police officer immediately approached our client and asked him if he had just urinated in the alley.  Our surprised client admitted he had, apologizing as much as he could, which was at least five times in the span of ten seconds.  Our client apparently hoped that the more he apologized, the more likely the police officer would decide not to issue a ticket or arrest him.

The attempt to avoid the ticket failed and our client was handed a ticket for a misdemeanor violation of Penal Code § 372 (“Public Nuisance”).  He was not taken to the Hermosa Beach Police Station and booked because he signed a promise to appear in the Torrance Superior Court a few weeks later.  The officer then walked away.

Our client was confused and worried about a misdemeanor charge.  He looked online and read that the maximum fine was $1,000 (plus penalties and assessments that would boost the total to be paid to over $4,500) and /or six months in jail, so he became concerned.  A few attorney websites incorrectly stated that upon a conviction for public urination, one must register as a sex offender for life.  This alarmed our client quite a bit.

He then contacted Greg Hill & Associates and met with Greg Hill.  Greg listened to the facts of the case and explained the law that applies, as well as his experience with similar such cases in the Torrance Courthouse.

Greg recommended that the client attend ten Alcoholics Anonymous (AA) meetings prior to the arraignment and then provide him with documentary proof of such attendance.

Greg then took the proof with him to court on the day of the arraignment and showed the prosecutor the AA sign-in sheet.  The client did not need to come to court with Greg, as an attorney may appear on behalf of a party in most misdemeanors, which did include this type of case.

The Redondo Beach City Prosecutor kindly agreed, in response to the client’s efforts to address the alcohol element involved in his conduct, to amend the complaint to allege a violation of Penal Code § 415(2) (“Disturbing the Peace – Playing Loud Music”) as an infraction.

An infraction is far preferable to a misdemeanor insofar as a misdemeanor can involve jail time and being on informal or summary probation for up to five years (although not in a Penal Code § 372 matter).  It merits mention that in Ventura County, on misdemeanor DUI cases, defendant is placed on formal probation, but this is not how Los Angeles, Orange, San Bernardino or Riverside County operate.

In contrast, an infraction involves no jail time and no probation.  Parking tickets are infractions, so the plea bargain offered to our client was attractive insofar as anyone viewing his record would see what amounted to a very minor offense comparable to a parking ticket.

The client then pled “No Contest” to the Penal Code § 415(2) charge and paid a $50 fine, plus penalties and assessments for a total of $308.  It is noteworthy that this very low fine is unusually low for such cases out of Hermosa Beach.  The fine is usually $150, plus penalties and assessments (total of $890), so our client’s effort at attending 10 AA’s, based on Greg’s advice, saved him not only a misdemeanor conviction on his record, but over $580.

The client was happy with the plea bargain, as he avoided a criminal record and was not placed on probation.
For more information about the issues in this public urination case summary, click on the following articles:
Contact us.
Serving Torrance, Long Beach, Compton, Airport Courthouses and Other Courthouses.