Our client, who is not disabled, was observed parking in a preferred parking spot at Universal Studios while driving a car with a blue disabled person placard on the license plate.  The car was owned by the grandfather of the client’s girlfriend.  Neither our client nor his girlfriend was disabled.
The client and his girlfriend had gone to Universal Studios on a date.  Our client was 20 and his girlfriend was 19.  They simply borrowed the grandfather’s car because neither our client nor his girlfriend had a car.
As they pulled into the parking lot structure at Universal Studios, a parking attendant apparently noticed the blue disabled person placard on the car’s license plate.  She then directed our client to drive to the preferred parking area.  Unbeknownst to the client and his girlfriend, this was apparently because the parking attendants saw the blue disabled person parking placard on the car’s license plate.
Once in the preferred area, the client parked and attempted to ask a Los Angeles County Sheriff whether they were misdirected into the preferred area by mistake.  Instead of answering the client’s question and allowing the client to park elsewhere, as the client intended, the officer issued the client a ticket for parking in a disabled person’s parking space while not transporting a disabled person, a violation of California Vehicle Code § 4461(d), a misdemeanor.  The client signed the ticket, which included a promise to appear in Van Nuys Superior Court in about six weeks.
Neither the client nor his girlfriend intended to usurp the parking privileges of the handicapped.  They just wanted to use the car, but park in general parking.
This case was extremely problematic for the client because he was still in college and being on probation for a misdemeanor, especially one involving dishonesty, could result in loss of student loans and future employment, not to mention perhaps being stigmatized as someone who shamefully and unlawfully uses handicapped person privileges.
The client came to Greg Hill & Associates and met with Greg.  Greg listened to the client explain what had happened and how he never intended to actually park in a handicapped parking area, but that a Universal Studios employee directed him to do so. 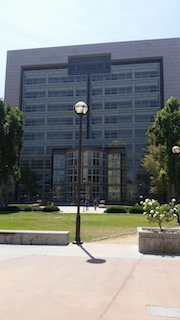 Van Nuys Courthouse
Greg then prepared a declaration from the client and his girlfriend, each attesting to their intention of parking in general parking and not handicapped parking.  The declarations both described their confusion in being directed to preferred parking and their attempt to ask the police there if they could park in general parking, but instead being issued a ticket.
After all, it was both the client’s and his girlfriend’s first time going to Universal Studios.  Moreover, the client did not actually park, as he kept the car ignition on when speaking to the sheriff.
Greg then mailed each declaration with a cover letter to the Los Angeles City Attorney’s Office suggesting that the matter be referred to prefiling diversion through an office hearing or the Neighborhood Justice Program because the client and his girlfriend lacked the intent to misuse the handicapped parking privileges associated with the license plate on the grandfather’s car.
Our client had no criminal history.
After Greg mailed the letter to the Los Angeles City Attorney’s Office, he received no response by the date of the arraignment, so Greg went to the Van Nuys Superior Court for the arraignment.  Unfortunately, a case against our client was filed, with one count for violating Vehicle Code § 4461 as a misdemeanor.
The Los Angeles City Attorney present made an initial plea bargain wherein our client would plead no contest to the misdemeanor and be placed on one year of informal, or summary, probation with an obligation to pay a $100 fine, plus penalties and assessments (this would total about $700).
Greg handed the Los Angeles City Attorney a copy of each declaration and requested pre-plea diversion, perhaps with our client performing 20 hours of community service in exchange for a dismissal.
The City Attorney said he would discuss this offer with his supervisor and the arraignment was continued for about a month.
When Greg returned to court about a month later, the City Attorney offered to resolve the case for an infraction and a $50 fine, with no penalties and assessments added.  Greg accepted this on behalf of the client.  This saved the client about $650 and spared him being on probation, which could have interfered with his college studies and internships.  He was very happy with this.
For more information about the issues in this case, please click on the following articles:
Contact us.
Serving Torrance, Long Beach, Compton, Airport Courthouses and Other Courthouses.