Our client, age 22, went out to Hermosa Beach with her friends. They had a grand time, only leaving the bars when closing time arrived at 2:00 a.m. It was now Saturday morning.

Our client then drove her friends home, but got lost on her way back to her own home in Torrance.

She drove around for, she believed, over three hours before eventually getting a flat tire to her Chevy Malibu when she accidentally turned onto train tracks off 166th Street in Gardena. When this happened, she just fell asleep behind the wheel of her car. She did turn off the ignition.

The Gist of This Summary:  Client found asleep in her car in Gardena, parked on active train tracks. Her BAC was 0.14%, but the time of her last driving was unknown, so legal relevance of her BAC was unclear. Reverse extrapolation of her BAC could mean it was over 0.20% when she last drove. Case resolved in Torrance Superior Court for DUI, but with shortest alcohol awareness program, the AB541.

At 6:30 a.m., when the sun rose at this time of year, a person driving by reported the car on the train tracks to the Gardena Police Department. The train tracks were still used by trains, so police went to the scene, arriving there about 7:15 a.m.

Gardena police tapped on the window of the car, eventually awaking our client at about 7:25 a.m. After our client provided her license, registration and proof of insurance, she was asked for perform some field sobriety tests in her half-awake state.

At 7:49 a.m. and 7:51 a.m., she provided a breath sample to a preliminary alcohol screening (PAS) device. The machine measured her breath alcohol content (BAC) at 0.172% and 0.177%. Police thereafter arrested her. This was our client’s first arrest of any type.

At this point, she was taken to the Gardena Police Department, where she provided a blood sample that was later measured to have a 0.14% BAC at 9:24 a.m.

The relevance of this was obviously an issue because if the blood was not drawn within three hours of her last driving, the BAC of the blood could not be presumed under Vehicle Code § 23152(b) as her BAC when she last drove. Did our client last drive before 6:24 a.m.?

Police arrived at the scene at 7:15 a.m., but our client easily could have been sleeping in her car since well before 6:24 a.m. Moreover, someone did report the car on the tracks at 6:30 a.m., so the real question is whether she was parked and asleep on the tracks for six minutes before someone called about her?

When the client came to Greg Hill & Associates and explained these facts, Greg recognized the “three-hour issue” first and foremost. Greg then also explained how a prosecution expert might testify as to what our client’s BAC was at 6:30 a.m. by reverse extrapolating her BAC, assuming a constant. 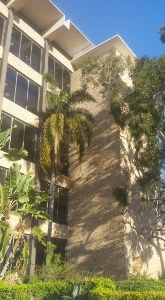 Torrance Superior Courthouse
When Greg then appeared in court for the arraignment in the Torrance Superior Court, Greg discussed the case with the Torrance District Attorney handling the case. Greg and the Torrance District Attorney then discussed resolving the case, Greg asking to resolve it as reckless driving and the prosecutor explaining that due to the high BAC, the best he could offer would be a DUI, but with just a three-month alcohol awareness program (the AB541 program) and the minimum statutory fine ($390, plus penalties and assessments) as part of thirty-six months of summary probation with also, due to the client’s youth, the Mothers Against Drunk Driving (MADD) Victim Impact Panel (VIP) and the Hospital and Morgue (HAM) program, too.

Greg then discussed the People’s offer with the client, explaining that while the offer was still to a DUI, the case would be transferred upstairs to another department with a junior DA who was well-known for setting high offers in the hope of forcing people to trial to give her jury trial experience. Greg therefore recommended that given the circumstances, he recommended that the client accept the offer, which she did.

The client was happy that Greg understood all the issues and was able to use his familiarity with how cases were handled in Torrance to her advantage.

For more information about DUI and issues, please click on the following articles: