Our client, age 43, was a Vons employee stepping in to work the cash register when another employee called in sick.  He usually worked as the assistant store manager and did not get onto the floor of the store much.
As he was helping customers in line, a young woman, accompanied by an older man, approximately 50 years old, who appeared to be her dad, stepped forward to buy a six-pack of beer.  It was about 4:00 p.m.  The young woman was holding the beer and then put it down on the counter for our client to ring up.  The man alongside her stepped forward with her in unison, again suggesting the two were together.
The woman appeared to be in her early twenties, based on how she was dressed, but she also could have been twenty or even nineteen.  It was hard to tell.  After all, our client was 43 and was no longer interested in young women.  Our client was married for over fifteen years and had his own two kids in high school.
As the woman set down the beer and looked up at our client reporting back the price of the beer, the older man looked our client in the eye.  He again seemed to be the father of the young girl. 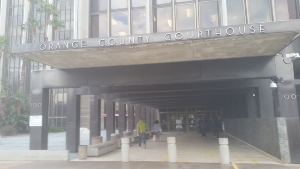 Santa Ana Courthouse
Our client did not ask for any identification such as a driver’s license showing one’s age from the woman, as it seemed like the older man may have been the purchaser.
Our client then stated that the price was going to just under $10.00 and the woman, not the man, handed our client a ten-dollar bill.  Our client accepted the $10.00, put it in the cash register and was handing the change to the woman when the older man told our client to stop.
In front of the other customers in line, the older man asked our client to call for another worker to stand in for him.  Our client was confused, but the older man then showed a Santa Ana Police Department badge and told our client that the woman was under 21 and our client was going to be cited for furnishing alcohol to a minor, Business & Professions Code § 25658(a).  A person from the California Department of Alcohol Beverage Control (ABC) stepped forward to provide our client a citation, which was already typed in for the most part.
The ABC representative asked for our client’s driver’s license and filled in his name, address and driver’s license number onto the ticket and then handed it to our client after he signed a promise to appear in the Santa Ana courthouse in about six weeks.
Our client was mortified by the citation.  He did not know how this would affect his employment, his ability to pay his sons’ college tuition, and his future employment within the same industry if fired.  He was been working at Vons for almost fifteen years.  It was a solid job with good benefits.
For a few weeks, he did nothing at all, too petrified to take action.  It was enough drama for him just to wait each day to be told if he was going to be asked to resign from Vons.  He was not, much to his great relief.
Finally, about a week before his arraignment, he decided to call a few attorneys.  He called several before he spoke with Greg Hill & Associates.  He and Greg discussed the ticket and how the older man with the police decoy confused our client into who was the actual customer.  Greg commented that this is not the best defense because it seemed to acknowledge that our client recognized that the woman was under twenty-one.  Instead, Greg recommended that the client immediately enroll in a LEAD (licensee education on alcohol and drugs) class, a free program that is offered by California Department of Alcohol Beverage Control.
While the client could not take the class prior to the arraignment, it would be helpful, Greg said if the client planned on taking such a class and that Greg could so advise the prosecutor at the arraignment of this in hopes of resolving the case through diversion.  Diversion, Greg explained, was a way our client could avoid a conviction for such an offense, which would be invaluable if the client intended on remaining employed with Vons or any other grocery store in the future.
Greg then appeared at the arraignment at the Santa Ana courthouse.  The client remained at work.  Greg did not find our client’s name under the listing of cases for any hearing for that day.  Greg then verified this with the criminal clerks’ office and then the Orange County District Attorney’s office on the second floor.  In speaking with the DA’s office, Greg provided the citation number and was told that the case was a DA reject.
Greg then shared this good news with the client, who was overjoyed at the good news and its significance for his career and his family.
For more information about furnishing alcohol to minor, please click on the following articles:
Contact us.
Serving Torrance, Long Beach, Compton, Airport Courthouses and Other Courthouses.