Furnishing Alcohol to a Minor at the Avalon, No Case Filed

The Avalon nightclub in Hollywood is one of the few clubs around that allows both under 21 and over 21 entrance and serves alcohol.  It is an iconic club located near the famous Hollywood Boulevard and Vine intersection.  It first opened in 1927 with burlesque shows.  It was the place to go.  It hosted many famous events.  Richard Nixon gave his famous “Checkers” speech here back in 1952.  It is huge, too, holding up to 1,500 people.  It is located right across the street from Capital Records.  Some might say it is quintessential Hollywood. 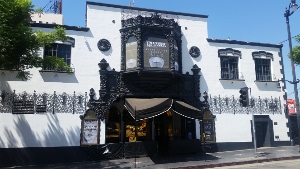 Avalon Nightclub in Hollywood
This storied history also attracts those who are over 21 to show older teenagers and those under 21 this beautiful landmark – and enjoy live music there and have a beer.  The problem is that with such a large place, undercover police can mingle easily and spot those who should not be drinking alcohol doing just that.

Condensed Version of This Case: Client at the Avalon in Hollywood and hands her beer to a 21-year-old friend, who then hands her beer to a 19-year-old.  Our client was a school teacher.  Client attends ten AA meetings on Greg’s recommendation and Greg contacts L.A. City Attorney’s office, recommending an office hearing.  Case neither filed nor referred to office hearing.

Our client, age 23, had been to the Avalon and was eager to show her nineteen-year-old friend this classic club.  They went there and, while watched by an undercover police officer, our client allegedly furnished alcohol to her younger friend close to midnight.

It is unclear if the minor even drank any of the drink.  This was because our client handed her beer can to a friend, who was over 21, because the client was dancing.  This took place at the left side of the dance floor facing the stage.

Our client’s friend already had her own can of beer, so she handed her own beer to the nineteen-year-old.  Our client was then cited for furnishing alcohol to a minor, a violation of California Business and Professions Code § 25658(a).

Our client had no prior criminal history.  She was a teacher with an emergency intern permit and desired to soon apply for her teaching credential, so having this case resolved without a misdemeanor on her record, especially for this type of offense if one sought to be around minors as a profession.

She called Greg Hill & Associates and spoke to Greg immediately.  Greg listened to the client explain what happened and agreed that perhaps the police actually ticketed the wrong person, as our client did not directly furnish the underage person with alcohol.

Greg then listened to the client explain her licensing concerns with having a misdemeanor, no less for this specific offense.

Greg then explained his experience in handling such offenses including several with the Avalon.  He explained how the case often resolves with an office hearing, but also how it could be reduced to an infraction for another offense by amending the complaint.

Greg further explained that the Los Angeles City Attorney’s Office would be referred the case and that while office hearings had been used for this offense in the past, there was no guarantee that this would continue.

Greg also explained that judicial diversion, although it results in a dismissal, was not advisable because the client must enter a plea to a misdemeanor first, which would be considered a conviction by the state licensing board.

Because there was no guarantee of an office hearing, Greg recommended that the client attend at least ten Alcoholics Anonymous (AA) meetings before the arraignment and that she provide Greg with her sign-in sheet to take to the arraignment, if the case proceeds to an arraignment.

Greg then wrote a letter to the Los Angeles City Attorney’s Office explaining the facts of the case and suggesting that the matter be resolved through an office hearing.  He mentioned how his client was attending AA meetings to better appreciate the significance of alcohol abuse, although she did not feel criminally liable for violating 25658(a).

Greg then appeared at the Clara Shortridge Foltz courthouse at 210 West Temple for the arraignment, but the City Attorney’s office had decided not to file the case at all.  The case also was not even referred for an office hearing.

The client was overjoyed that this potentially career ending misdemeanor was resolved with no filing at all and not even an office hearing.

For more information about an office hearing and juvenile alcohol issues, please click on the following articles:
Contact us.
Serving Torrance, Long Beach, Compton, Airport Courthouses and Other Courthouses.