Our client was driving along a rather busy street in Fullerton when the car in front of him stopped for seemingly no reason.  In response, our surprised client slammed on his brakes, but could see a collision was likely, so he steered off the road and ran into a Time Warner cable box, destroying it.  The green box was about two feet high by four feet wide and four feet long. It was the type of box that controlled Time Warner cable service to a few houses nearby.

Our client got out of his car and looked around.  Luckily, his car barely sustained a nick and he was not injured at all.  He wanted to notify the box owner, but the box was in the middle of a large grass field and the nearest building was perhaps 200 feet away.  Moreover, it was an apartment building, so there really was not a single person who might own the box.  He did not know what to do, so he left the scene.  He did not think of using Google to find a phone number for Time Warner to try to report the incident.

About three weeks later, he received a letter from the Fullerton Superior Court that a criminal case had been filed against him for hit and run.  Apparently, a passing motorist had reported his license plate number to the police, who then tracked the plate to our client, obtained his address and then the court sent him the notice of a case filing.

The client came to our office, unsure what to do.  He thought there were no witnesses because no one stopped when he did.  No one even talked to him.

Moreover, he was very concerned because he was becoming a professor at a local junior college and was still in his probationary period.  A misdemeanor conviction for something like hit and run would be fatal to his hopes of becoming a professor, or so he thought.  The common perception of such a crime, indeed, was that someone ran over a pedestrian and left the scene to escape responsibility.

In reality, the more practical concern of a school or an employer in this situation is that since the client may be on probation, he may violate probation and be thrown in jail, missing work or teaching obligations.

Greg Hill first tried to arrange for a civil compromise with Time Warner under Penal Code §§ 1377 and 1378, but Time Warner did not respond at all.  Under Penal Code § 1054.1 and Brady v. Maryland, Greg also demanded the police report from the Fullerton District Attorney assigned to the case.  Greg separately also requested the police report from the Fullerton Police Department.  No one responded. 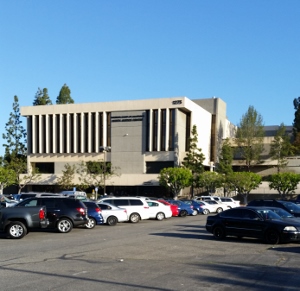 North Justice Center, Fullerton
At the arraignment, the District Attorney acknowledged our demand for the police report and apologized profusely, explaining how busy he had been recently.  He then offered to compensate for his failure by permitting our client diversion, whereby our client would attend a safe driving class and the case would be dismissed.  Upon receiving this great offer, Greg continued the arraignment so that the court record would not even show our client entered a “Not Guilty” plea to a misdemeanor, which would create a record for a misdemeanor.

Our client then accepted the offer and took the safe driving class.

Greg then returned to court for the continued arraignment date and the District Attorney dismissed the case in the interests of justice under Penal Code § 1385.  This case took place in 2013.  Now, in 2019, the client could ask the judge to seal the police report and the court file under Penal Code § 851.91 (the CARE Act).

Our client was quite happy, as his record remained clean, with no convictions.  He would make it through his job’s probationary period unscathed.