Example of Judge Denying Bail, No Abuse of Discretion

Under the California Constitution, article I, Section 12, a person has “an absolute right to bail” with two exceptions.  In re Law (1973) 10 Cal.3d 21, 25.  The exceptions apply to capital cases and when, in “[f]elony offenses involving acts of violence on another person, or felony sexual assault offenses on another person, when the facts are evident or the presumption great and the court finds based upon clear and convincing evidence that there is a substantial likelihood the person’s release would result in great bodily harm to others.” California Constitution, article 1, § 12(b).

The Gist of this Article: A judge does not abuse his discretion in denying bail when there is clear and convincing evidence that there is substantial likelihood that the person’s release would result in great bodily injury to others, as the following summary exemplifies.

In July 2017, Christopher Lee White, age 27, and his friend, Jeremiah Owens, went to the beach in Encinitas.  Owens spent much of the day pointing out girls and talking about “grabbing” them, according to White.  At one point, Owens allegedly said, “you know, maybe I grab her . . . caveman style.”  According to White, Owens at one point wanted to leave the beach to follow a girl who had been sitting near them.
At some point, Owens asked White, “if I was gonna do something, would you stop me? . . . If I was taking things too far, would you stop me?”  White claimed to be confused by his friend’s statements and believed he was joking.  White also claimed to answer, “yeah, I’d stop you.”
Later in the afternoon, the men left the beach, but remained in the parking lot around White’s truck.  At that time, 15-year-old J.D. showed up on her bike to go surfing.  J.D. later described White and Owens as they “looked a little out of place” and they gave her “a weird feeling.”  “Creepy” was a word used by a woman nearby who was loading her car.  The woman’s son allegedly felt the same way and took a cellphone video of the two men.
White recalled that Owens may have said, “I think I’m going to go up and get that girl” at which point White apparently encouraged him to “go and get her.”  White thought Owens was just going to go talk with her. 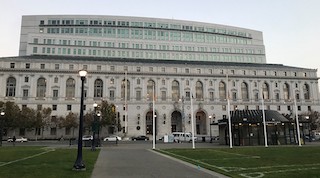 CA Supreme Court San Francisco
Instead, Owens crossed the street and grabbed J.D. by the neck, “like a pressure lock,” and tried to push her face in the pavement.  J.D. testified that he would have succeeded, but she put both her hands on the pavement to brace herself.  While Owens was doing this, J.D. said, “No. No. Stop.  Stop.”
Owens then said to J.D., “All right, let’s do this” and tried to pull her back up and towards the truck.  J.D. then managed to pull away.  She ran away and said, “That’s not cool.  You can’t do that.”  She then ran into a friend’s house, which had a large security gate, which she closed.  As she looked toward White, who she thought was acting as a lookout for Owens.
J.D. then heard White say “sorry," yet she also heard him say to Owens “go in the house.”
Owens then jumped into White’s truck and, with White driving, they sped away.  They both were later arrested.
White and Owens were charged with attempted kidnapping with intent to commit rape (Penal Code § 209(b)), assault with intent to commit rape (Penal Code § 220(a)(1)), contact with a minor with intent to commit a sexual offense (Penal Code § 288.3(a)) and false imprisonment (Penal Code §§ 236, 237).
White was held without bail with the judge making two findings: (1) there was substantial evidence that White aided and abetted his friend, Jeremiah Owens, in the charged crimes; and (2) a “substantial likelihood” existed, supported by clear and convincing evidence, that White’s release would result in great bodily harm to others.”
White then appealed the denial of bail to him.  The Fourth Appellate District affirmed the trial court.
On appeal to the California Supreme Court, White argued that the facts did not show a “substantial likelihood” by clear and convincing evidence that his release would result in great bodily harm to others.
The California Supreme Court was not willing to reverse the Fourth Appellate District.  The Supreme Court acknowledged that White never touched J.D. and some of the facts seemed to exculpate him.  However, the Court pointed out that these were based on White’s own testimony and not that of others.  What remained was a brazen attack on a fifteen-year old and then when J.D. broke free and was running into a house, White said to Owens “go in the house” to follow J.D.
We understand the distinction between what Owens did and what White allegedly did and thus, we can understand why White appealed the trial court’s ruling.  However, we believe no judge is going to have his or her name signed to a ruling that permits an accused rapist to post bail and be free to walk the streets again, especially when the alleged victim is fifteen years old.
The citation for the California Supreme Court ruling discussed above is People v. Christopher Lee White (2020) 9 Cal. 5th 456, 262 Cal. Rptr. 3d 602, 463 P.3d 802.
For more information about bail in general please click on the following articles:
Contact us.
Serving Torrance, Long Beach, Compton, Airport Courthouses and Other Courthouses.