Our client, age 26 and with ambitions of becoming a police officer, parked his car outside a 7-11 in El Segundo to get a cup of coffee.  Before he could enter the store, two young men, appearing about 20, approached him in the parking lot and asked him to buy them a six pack of beer.  They pulled out a ten-dollar bill and said he could keep the change if he did so. 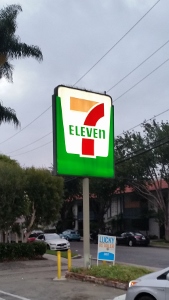 Our client initially told the two no, but the two young men followed our client and kept asking him, eventually blocking his entry to the 7-11 and demanding our client buy them some beer.  The young men allegedly told our client that they were under 21 and could not buy beer, so they needed help.  They held up the ten-dollar bill again and asked him if we wanted more for the favor.

Our client was fearful he was going to be beaten up or have his car vandalized while he was inside the store if he did not agree, so he agreed.  He was then handed $10 and asked to get a six pack of Coors Light.

Our client then did buy the beer and was promptly arrested as he handed the beer to the two youths while exiting the store.  Our client did not resist arrest.  He felt set up and stupid.

He was immediately placed in handcuffs, transported to the El Segundo Police Station and cited for violating Business and Professions Code § 25658(a), furnishing alcohol to a person under the age of 21.

The client came to Greg Hill & Associates almost in tears, fearful that his dream of becoming a police officer was over.  Greg listened to his story of feeling as if he had been entrapped or coerced into buying the beer for the youths.  He felt that the store’s security video would show how he was cornered and how he initially tried to resist the two young men.

The thought of just getting in his car to protect his car and driving away to the next coffee shop or 7-11 never crossed his mind, he said.

Greg Hill & Associates then hand-delivered a Demand to Preserve Evidence to the manager of the El Segundo 7-11 to demand that the 7-11 preserve and turn over the store security video for the time and day of our client’s encounter with the police decoys.  The 7-11 had video cameras outside the entrance to the store where our client was cornered.

At the arraignment in the Airport Courthouse, the prosecutor explained that there was no video of the sales transaction and told us that the initial plea bargain would be a plea to violating Business and Professions Code § 25658(a), two years of informal, or summary, probation, a $200 fine, plus penalties and assessments (about a $900 total payment) and a requirement that our client attend ten Alcoholics Anonymous (AA) meetings.

Greg Hill advised the client of the rather harsh deal, which would certainly doom our client’s ambition of becoming a police officer, but did not give up.

At the next hearing, Greg showed the prosecutor our client’s “Good Guy” packet, which included photographs of our client with his family.  The prosecutor realized that this defendant was much more than just another person arrested in a sting operation.  He saw that it was a real person, with a family and an honorable goal of being a police officer.

Greg then negotiated a dismissal of the complaint if our client would perform five days of approved community service.  Our client was quite happy and accepted the deal, knowing that if he did the five days of community service, he would avoid a conviction that might ruin his career goals.
For more information about the issues in this case summary, click on the following articles:
Contact us.