Home
Other Information
Criminal Defense Articles
DUI Checkpoint Stops - Can This Method Beat Them? We Say No

DUI Checkpoint Stops - Can This Method Beat Them? We Say No

After observing many, many police reports arising from arrests at a DUI Sobriety Checkpoint or simply a DUI checkpoint stop, we have noticed that the most common reason each client of ours fails to be waved through is an officer’s observation of the odor of alcohol.
Sometimes, the person’s driving is unusual or the driver is not wearing a seatbelt, but then the odor of alcohol is allegedly smelled and the client is asked to pull over.

In a Nutshell:  We do not recommend the strategy advocated by Massachusetts attorney Warren Redlich for many reasons, most importantly because it may lead to a broken car window and then a physical interaction with police who feel challenged by Redlich’s audacity.

The motorist will drive up to the checkpoint and the officer will casually request the driver’s license and registration.  As the client does so, the officer’s nose is working overtime like a bloodhound.  The request for the license and registration allows the officer time to smell the odor of alcohol, if any, and observe the client’s fumbling for documents.  This observation of his or her demeanor, not the information on the license or registration of course, is what allows the officer to further investigate.  Often, our client is described as confused and extremely nervous.

Bloodhound
Massachusetts attorney Warren Redlich noticed this, too, and took things a step further.  Combined with his knowledge of the Fourth Amendment concerning unreasonable searches, he decided to issue signs to prevent someone from having to roll down their window.  The sign says:
“I am not rolling down my window.
I remain silent.
Here is my license.  No search allowed.
I want to speak to my attorney.”
This sign, he says, is illegal in most states, but not California, New York, Florida, New Jersey, Ohio, Arkansas, Utah, Texas, Georgia or South Carolina.  If someone were to use the sign, he or she should hold up his or her license to the window for the officer to see.
The sign states in smaller print: “Put any tickets under the windshield wiper.  I am not required to sign.  I am not required to hand you my license.  I am not opening my window.”
His position is that officers are not entitled to conduct a search of one’s breath without a warrant, which is what checkpoint stops and even some pretextual traffic stops cleverly do.  He believes officers should read this sign, take note of the driver’s assertion of his or her Fourth Amendment rights against unreasonable searches, as well as the Fifth Amendment right to remain silent, and then waive the driver through, to continue driving. 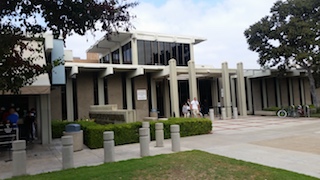 Westminster Courthouse
Our office applauds Mr. Redlich’s creativity, but are cautious to encourage anyone to try this.  Clearly, it would be stupid to try in certain situations.  After all, our experience with police officers is that the police officer most likely will not give up and just waive the driver through after reading the sign.  Instead, the officer will view the sign as a challenge to his authority and power.  He will direct the driver to pull over on the side of the road and call his or her supervisor to discuss the driver’s assertion of rights, most likely while blocking in the driver to prevent him or her from leaving the scene.
The supervisor is likely to call the watch commander and further discuss the sign.  The police officer could then just hold the driver on the side of the road until our client rolls down his window or opens the door.  This type of Mexican standoff could last hours.  After all, the police officers are more than likely to be happy to wait it out.
In the meantime, the officers could send a text or e-mail out to get a warrant.  Nowadays, police can obtain a warrant within minutes.  The good cause for the warrant would most likely be the driver’s lack of cooperation, legally described as a violation of Penal Code § 148(a)(1) (obstructing, delaying or resisting a peace officer).  This raises a whole host of further issues, such as whether even such a warrant would then be proper, but we believe officers could find reason to break open a window eventually and violently extract the motorist from car, handcuff him and arrest him.
Moreover, we disagree with Mr. Redlich’s belief that a driver in California is not required to sign a ticket.
The simple solution to this issue is simply to not drink and drive.

For more information about the issues in this article, click on the following articles:
Watch our video on DUI by clicking here.