Domestic Violence: What Qualifies as a Dating Relationship?

When someone is convicted of a crime of domestic violence, such as Penal Code §§ 273.5 or 243(e)(1), but also certain forms of vandalism and annoying phone calls, the judge must impose certain probation conditions as mandated under Penal Code § 1203.97.

Why This Article Matters: Within the context of Penal Code §§ 273.5 and 243(e)(1), a dating relationship includes anyone with whom defendant enjoyed “frequent, intimate associations primarily characterized by the expectation of affection or sexual involvement independent of financial considerations.”  The relationship could have existed many years prior to the domestic violence.

Section 1203.97 requires that if defendant “is granted probation for a crime in which the victim is a person defined under Section 6211 of the Family Code,” the probation must include a number of specific terms, including a minimum probationary period, a criminal protective order, specific fines and fees, and successful completion of a batterer’s program.
One category of people identified under Section 6211(c) of the Family Code is a “person with whom the defendant is having or had a dating or engagement relationship.”  What is a dating relationship, then?
“Dating relationship” means frequent, intimate associations primarily characterized by the expectation of affection or sexual involvement independent of financial considerations.  Family Code § 6210.  People v. Rucker (2005) 126 Cal.App.4th 1107, 1116.  This definition “does not require serious courtship, an increasingly exclusive interest, shared expectation of growth, or that the relationship endures for a length of time.”  Id.  This could include spending time at each other’s homes and recognition by others of the two spending time together.  Nowadays, that may mean the two post photographs of each other on social media.
Conversely, the definition does not include a “casual relationship or an ordinary fraternization between two individuals in a business or social context.” Id., at 1117.  “In a social context” can mean within a cultural group, a religious group or recreational activity, i.e., skiing together, running together, or going to the gym together in a limited amount.
When such a relationship ends, if defendant characterizes it as a “break up,” this is essentially an admission that there was more than just a casual relationship in the mind of defendant.  If defendant expressed jealousy in what the other party did socially, including dating others, this is also indicative of a “dating relationship.” 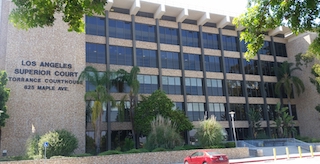 Torrance Courthouse
When a significant period of time passes after the “break up,” i.e., several years, such a Family Code definition can still apply depending upon the circumstances.  If defendant kept in contact with the other party or mutual friends, with a personal interest in the other, that would suggest any violence between the two would be still be considered domestic violence, depending upon what led to the violence.
What our office frequently sees is a fight between two people who used to have a dating relationship or were even married years earlier.  The two have not lived with each other in years or perhaps they have not seen each other in years.  Can a fight between the two or one’s vandalizing the parked car of another outside the party be considered domestic violence?  The answer is absolutely yes depending upon the context, the circumstances leading to the conduct and the reaction of the defendant to questions from law enforcement thereafter.
Likewise, our office has seen a client charged with domestic violence after just a single date.  Can this qualify a domestic violence?  Our answer would be that it matters.  What happened on the date?  What happened after the date?  Did the two keep in contact and if so, how frequent was their communication?  If defendant shows that he considered the other “his” or told her “I’m yours,” even after one date, this could lead a prosecutor to seek probation conditions under Penal Code § 1203.97 as stated above.
Lastly, although this should not need clarification, sex between the two parties is not required for a “dating relationship” to exist.  In fact, even if one had not touched the other party, a prosecutor could argue that a “dating relationship” existed.  As defense attorneys, we would want to explain the context, perhaps due to the age of the parties or their cultural background, of the limited interaction as not meeting the definition of “dating relationship” and being more of a casual meeting only.
For more information about domestic violence, please click on the following articles:
Contact us.
Serving Torrance, Long Beach, Compton, Airport Courthouses and Other Courthouses.