The short answer to above question is most likely yes, however, the reasoning behind it merits understanding if one is on house arrest, either pre-sentencing or post-sentencing, or if one is considering it as an alternative to county jail.

Summary in 50 Words or Less:  Good time, work time credits do apply to anyone serving pre-sentence time at home or serving their sentence at home on a GPS or SCRAM monitor, but many companies who provided such monitoring systems used to resist such calculations.  Now they resist this less.

Our answer of “most likely” is less than a solid “yes” because, as described below, not all counties in California seem to follow Penal Code § 1203.017, however, if they did, everyone would receive four days of credit for time served for every two days actually on house arrest.
After all, Penal Code § 4019, which allows a person a person to earn four days of credit for each two days of time actually served in custody, does not address electronic home monitoring, such as someone fitted with a GPS monitor with curfew and/or a secure remote continuous alcohol monitoring (SCRAM) device installed (meaning on one’s ankle).
However, Penal Code § 1203.017 states that if the defendant is put on electronic monitoring involuntarily as a result of jail overcrowding, “[p]articipants in the program shall receive any sentence reduction credits that they would have received had they served their sentences in a county correctional facility."  This seems to suggest that good conduct credits would be available if the jail releases an inmate to electronic home monitoring due to jail overcrowding. 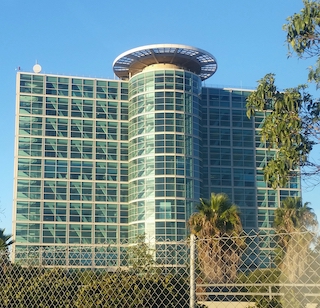 Airport Courthouse
And most judges do agree that this is exactly how time at home on house arrest should be calculated.  Our office has sought judicial orders that such credits do apply, which in turn allow our client to reduce his time on such a monitor.  This saves the client money and permits him or her to more freely travel to and from work, or other activities.
Seeking such an order is increasingly less and less necessary as more and more providers of electronic home monitoring (known as Supervised Electronic Confinement (SEC) in Orange County) allow such credits without a court order.  This is true with LCA Services and Diversified Monitoring Systems, which are the authorized providers for the SCRAM (Secure Continuous Remote Alcohol Monitoring), GPS tracking and drug patch monitoring systems in most of the southern California Counties.
This is significant, we believe, because in the past such companies resisted giving “good-time, work-time credit” to house arrest participants for the simple reason that it meant the person on house arrest would be wearing the GPS or SCRAM device for a shorter period of time, cutting the companies’ revenue.
LCA Services has commented that in some counties in Northern California, the courts do not permit application of Penal Code §§ 1203.17 and 4019 to such programs, which are authorized under § 1203.16.
Therefore, it is good to educate oneself on what to expect if one does opt or consider house arrest.  Besides the cost (about $15 per day), being on house arrest is not always the best choice for someone.  The probation department that authorizes this may conduct random searches of the person’s home and random drug testing.  There are also often very strict hours to come and go to work (a maximum of 50 hours is common), if one is allowed to go to work while on house arrest.  “Errand time” is often limited to four hours per week if allowed at all.
In balance, however, most people who are eligible for house arrest (domestic violence defendants generally are not, as well as felony DUI’s are not) are extremely grateful for the program if the person can keep his or her job, continue schooling, support their family and attend medical appointments with their regular doctor.
Most participants in the electronic home monitoring program can also attend court-ordered or probation-ordered programs and make the money needed to pay court fines and fees.  The program can also be very helpful for someone who commits a crime in one county, for example, Los Angeles, but lives in another county, say Shasta County, and is allowed to serve their county jail sentence at home.