Our client, age 25, was over at a friend’s house in Compton, drinking and watching television.  It was a Tuesday in late November.  As 4:30 p.m. arrived and it began to get dark, our client headed home, going northbound on Alameda Avenue, toward the Lynwood Jail (also known as the Century Regional Detention Center).
She turned right just before the jail, crossed the railroad tracks, and headed east, before turning left again to head northbound on the opposite side of the railroad tracks.
Feeling the full effects of the alcohol, she then fell asleep while driving and her car crashed into the entrance gate to a warehouse parking lot.  No one saw the actual crash, which woke up our client.  Soon, people from inside the gate came rushing out to check on our client to see if she was injured.  Someone also called 911 and the CHP responded to the scene quickly.
Fortunately, our client was not injured.  Police arrived and allegedly observed our client stumbling around the outside of her car, inspecting the damage to her PT Cruiser.  Witnesses to the client walking about told police she threatened them by saying, “Don’t call the police or my family will find you and you’ll regret it.”
Police allegedly detected the odor of alcohol and asked our client if she had been drinking.  Our client answered, “one or two beers.”  Police then looked inside her car and notice a bottle of 750 milliliter “Fireball” cinnamon whisky, which is 66 proof (33% alcohol) and an empty 200 milliliter “Buzzballz” tequila.  Officers asked her if she had consumed any Fireball that afternoon, our client answered, “I really love Fireball.”
She also told police, “I’m not fucked up.”  She also allegedly told police to just let her drive home “or my family will talk to you.”
At the scene, our client refused to submit to a breathalyzer test, which is her right under Vehicle Code § 23612(i). 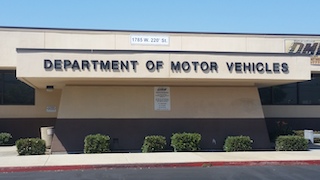 DMV Torrance
She was then arrested and taken to the Compton Sheriff’s station directly alongside the Compton Courthouse.  There, the breath machine worked, but would only allow our client to give one breath, which was measured at 0.20% BAC, or 2.5 times the legal limit.  The machine’s clock was also not synchronized to the current time and the machine printed out only a partial report.
Compounding matters, the arresting officers never completed an Age 21 and Older Officer’s Statement (DS-367) concerning their arrest.
Our client was released from the Compton Sheriff’s Station the next morning and called Greg Hill & Associates.  The client and Greg discussed the facts of the case, which were still a bit hazy for the client.
Greg Hill & Associates then reserved a DMV Hearing for the client and received the police report and all other documents the DMV stated that they planned on introducing at the DMV Hearing.
At the DMV Hearing about four months later, the DMV subpoenaed the percipient witness who first saw our client after she had stopped driving.  He described our client stumbling around her car and threatening her with “her family.”  The arresting officer also was subpoenaed and testified that our client was involved in a car accident, smelled of alcohol and threatened him with “her family.”
Lastly, the DMV subpoenaed the police officer who operated the breath testing machine at the station.  He did not appear at the DMV Hearing and the DMV made a motion to continue the hearing.  Greg opposed the motion, arguing that because it was a subpoena, the witness’ appearance was required, not optional, so no continuance was permitted.
The DMV, however, continued the hearing anyways.  At the continued hearing, the same police officer was subpoenaed again to appear and did not appear.  The DMV again moved to continue the hearing and Greg again opposed the motion, rhetorically asking if a respondent would ever be allowed two bites at the apple, which would never be allowed.
The matter was then taken under submission and about two weeks later, our office received the DMV ruling, setting aside the suspension and reinstating our client’s driving privileges.  This made our client extremely happy.
For more information about DMV Hearings, please click on the following articles:
Contact us.
Serving Torrance, Long Beach, Compton, Airport Courthouses and Other Courthouses.