In Fresno County, Samuel Trinidad Medellin was with his friends at a brewery restaurant one night. An argument regarding alcohol service ensued between his party and the restaurant staff. The argument erupted into a melee during which Medellin hit two different staff members one time each.

The first victim suffered a quarter to half-inch cut along his jaw requiring three stitches to close. This injury was caused by a punch. The victim described the injury as “hurting for a few days,” resulting in “a little scar,” and his “false tooth . . .feeling a little loose after” the impact.

The second victim suffered a quarter inch long cut on his lip requiring seven stitches to close. This injury was also from a punch. The victim described his injury as leaving his lip “swollen for about a week and a half,” “hurting a lot,” and scarring. A witness described the injury as “bleeding pretty severely.”

Medellin was charged and a jury convicted him of two counts of felony assault (Penal Code §245(a)(4)), each with a great bodily injury enhancement (Penal Code § 12022.7) found true. The judge placed Medellin on formal probation and ordered him to serve one year in county jail, suspended on the condition that he successfully completed probation. 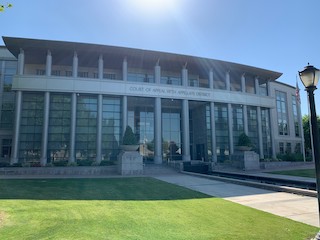 Court of Appeal Fifth Appellate District Fresno
Medellin appealed the verdict on three grounds. This article’s scope will be limited to his third argument, that the prosecutor misstated the law on great bodily injury during his closing argument.

The Fifth Appellate District reviewed the transcript from the trial and reversed the convictions.

It began its analysis by noting that in 2006, the California Judicial Council adopted the CALCRIM jury instructions defining great bodily injury as “an injury that is greater than minor or moderate harm. It is a physical injury that is significant or substantial.” People v. Reyes (2008) 160 Cal.App.4th 246, 251.

The prosecution conceded that the he misstated the law, but argued there was no resulting prejudice.

The appellate court disagreed. It explained that juries hold a “special regard” for prosecutors.  People v. Hill (1998) 17 Cal.4th  800, 827-828. “A prosecutor is held to a standard higher than that imposed on other attorneys because of the unique function he or she performs in representing the interests, and in exercising the sovereign power, of the state.”

As the United State Supreme Court has explained, the prosecutor represents “a sovereignty who obligation to govern impartially is as compelling as its obligation to govern at all, and whose interest, therefore, in a criminal prosecution is not that it shall win a case, but that justice shall be done.” People v. Peoples (2016) 62 Cal.4th 718, 792.

Here, the prosecutor plainly misstated the law. The cases defining great bodily harm have long required more than moderate harm, but the prosecutor argued more than minor harm alone was sufficient. The prosecutor’s misstatement rises to error because there was “a reasonable likelihood the jury understood or applied the prosecutor’s argument in an improper or erroneous manner.” People v. Centeno (2014) 60 Cal.4th 659, at 667.

The appellate court then set forth the standard it must follow for reversing the convictions: we “must reverse the convictions unless, after examining the entire cause, including the evidence, and considering all relevant circumstances,” we determine the error is “harmless beyond a reasonable doubt.”

Here, it found the error was not harmless beyond a reasonable doubt for multiple reasons. It found that it was possible the jury believed only that “more than minor” harm was sufficient to prove the elements – and here, the injuries were not overwhelmingly severe. Moreover, the prosecutor repeatedly emphasized “more than minor” as the standard, when it was not. A jury then could then find the injuries were more than minor, but less than moderate – and find great bodily injury, which would have been contrary to the legal standard.

Consequently, the convictions were reversed.

We bring this summary to the reader’s attention because great bodily injury is commonly misunderstood, including by prosecutors and judges.
The citation for the Fifth Appellate District Court ruling discussed above is People v. Samuel Trinidad Medellin (5th App. Dist., 2020) 45 Cal. App. 5th 519, 258 Cal. Rptr. 3d 867.

For more information about prosecutorial misconduct or misstatements of the law to a jury, please click on the following articles:
Contact us.
Serving Torrance, Long Beach, Compton, Airport Courthouses and Other Courthouses.