Kurt William Havelock was convicted in an Arizona federal court of violating 18 U.S.C. § 876 (a).  This section prohibits the mailing of communications, “addressed to any other person and containing any threat to kidnap any person or any threat to injure the person of the addressee or of another.”

The facts leading up Havelock’s conviction began five days before Super Bowl XLII, which took place on February 3, 2008.  Havelock went to a gun store and bought an AR-15 assault rifle, five extra magazines and a massive amount of ammunition.  Five days later and about a half hour before kickoff, he loaded the AR-15 and several clips of ammunition into his car.

He then drove to a local post office, where he deposited six Priority Mail envelopes to the New York Times, the Los Angeles Times, the Phoenix New Times, the Associated Press and two websites, theshizz.org and azpunkizom.  Each packet contained a “media packet” not addressed to anyone.  The media packet included a six page, rambling “econo-political” manifesto entitled “Karma Leveller: Bad Thoughts on a Beautiful Day,” an apology letter addressed to the police, directing them to his car near the Super Bowl stadium in Glendale, Arizona, and a second letter to the two music websites, describing Havelock’s business troubles.

Havelock’s manifesto contained promises that he would “slay your children” and “shed the blood of the innocent.”

After depositing the six envelopes, however, Havelock had second thoughts.  Instead of driving to the Super Bowl, he drove to the local police station and explained what he had done.

He was thereafter charged with six counts of violating 18 U.S.C. § 876 (a) for mailing threatening communications.  In response, he filed a motion to dismiss the complaint, arguing the § 876 (c) charges applied only to “natural persons” and since his letters were only addressed to corporations, the charges were defective.  The trial court denied Havelock’s motion and a jury then convicted him.

Havelock thereafter appealed to the Ninth Circuit Court of Appeals, which agreed with Havelock (U.S. v. Kurt William Havelock (2012 DJDAR 176).  The Ninth Circuit considered Havelock’s challenge a matter of pure statutory construction.  In looking at the text of the statute, the Court noted that the “person” was used twelve times within section 876 and in each instance, the context was concerning conduct toward a natural person, i.e. kidnapping a person, injuring a person, damaging the reputation of a deceased person, accusing a person of crime, for example.  In noting these contexts, the Appellate Court commented that it made no sense to have section 876 apply to a corporation because one cannot kidnap a corporation or damage the reputation of a deceased corporation. 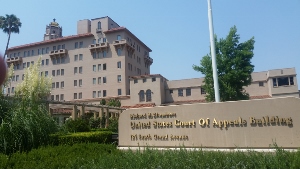 Ninth Circuit Court of Appeals
Looking further, the Court responded to the rhetorical question of whether limiting the statute’s scope to “natural persons” insulated from criminal liability offensive communications to non-natural entities.  The Court commented that “this is not an absurd result,” as the intent of the statute is to protect the recipient’s sense of personal safety and that sense is not implicated when the recipient or addressee of the package is an organization.

Moreover, the Court noted that Havelock’s “Manifesto,” although it contained threats against a person or persons, was not addressed to anyone in particular.

As such, the Court reversed the conviction and sent the case back down to the trial court for a judgment of acquittal.  Mr. Havelock must have been a very happy man.

For more information about criminal threats, click on the following articles:
For case summaries of selected cases our firm has handled, click here.