Cash Seized From Suspected Drug Dealer Returned to Him

In arrests for the sale of drugs, it is common for police to find the suspect in not only possession of more narcotics than for personal use, but also large amounts of cash.  Police quickly conclude that the cash is evidence of sales, often even when no other evidence of sales exists.  Such evidence can be a digital scale, a pay-owe sheet, multiple cell phones, text messages concerning purchases and prices or individual packets of narcotics, carefully weighed.

In 50 Words or Less:  Cash Seized from Suspected Drug Dealer Returned to Him after Police, Rather than Prosecutor, Start Forfeiture Proceedings.

What happens to all the cash?  While it is understandable that the cash may be forfeited if defendant is convicted of sales, as the fruit or proceed of illegal sales, what if the case is dismissed?

The case of Adolfo Cuevas answered all these questions.  Cuevas and his friend were driving the car of Cuevas’ cousin.  At about 3:00 P.M., they were at a shopping mall when the alarm to the car went off.  Tulare County police came to the scene. 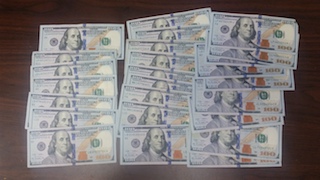 Lots of Cash
Instead, police conducted pat down searches of Cuevas and found $7,014.37 in his pockets.  Cuevas’ friend had $5,862.62 in his pockets.  Police then used a dog to sniff the interior of the car.  The dog found (with the help of police) $3,990 in a space behind the car’s dashboard, for a total of $16,866.99 discovered.
The police then detained Cuevas and his friend.  At the police station, the police inspected Cuevas and his friend.  The looked through Cuevas’ wallet and found 0.42 grams of meth on a five dollar bill.

Throughout the afternoon after the police arrived, Cuevas explained that he had just sold his Chevy Tahoe for $5,500 and that the remainder of the money was his savings.  He explained that he just did not trust banks and regularly carried his savings with him in his car.

While Cuevas and his friend were still at the police station, one of the officers handed Cuevas a City of Tulare Police Department “Notice of Non-judicial Forfeiture Proceedings” form, listing $16,871.99 as being subject to forfeiture due to violations of Health and Safety Code § 11379, possession of a controlled substance for purpose of sales.

The District Attorney, however, filed its complaint for just a violation of Health and Safety Code § 11377 (a), possession of a controlled substance.  About two months later, the distinct attorney placed a notice of non-judicial forfeiture in the Visalia-Times Delta Newspaper on 3 days, one week apart.  The notice said the reason was for violations of 11379.

Mr. Cuevas thereafter filed a motion to suppress evidence under Penal Code § 1538.5.  Before a hearing on the motion, however, the prosecutor dismissed the entire case.

This left the issue of returning the cash to Cuevas and his friend.  Cuevas then filed a motion to compel the return of property, also under Penal Code § 1538.5.

Cuevas thus filed his appeal with the Fifth Appellate District, which ruled in Cuevas’ favor (2013 DJDAR 15915).

Furthermore, the prosecutor must file a petition for forfeiture within certain time limits.  People v. Superior Court (Plascencia) (2002) 103 Cal.App. 4th 409, 419.  Here, the prosecution never even filed the petition with the court.

The Fifth Appellate Court rejected the prosecutor’s defense that Cuevas received sufficient notice, although the notice did not meet the exacting standards of the code, as the police gave the notice.

Consequently, Cuevas’ appeal was granted.  The Fifth Appellate District directed the trial court to vacate its prior order and have a new hearing on the return of property, which would surely be granted.

For more information about return of property from the police, click on the following articles:
Contact Greg Hill & Associates