Our client was arrested on suspicion of grand theft (Penal Code § 487) by the Los Angeles Sheriff’s Department, on direction from the Veteran’s Administration, for improperly receiving $38,413 in Veterans Affairs (VA) dependent benefits on behalf of her mother, a veteran who had died almost four years earlier.  Her mother had served our county in the U.S. Air Force.  After being arrested, our client was released on her own recognizance and told to expect mail notification of a hearing date from the court.

Our client knew she was not supposed to continue receiving her mother’s veteran’s pension benefits, but did not know how to go about stopping the payments.  Meanwhile, the payments just continued, month after month.  She trusted that eventually the news of her mother’s death would become known by the federal government and the benefits would just stop being direct deposited into her mom’s account (which our client took over when her mom passed away).  However, this did not happen.

Our client had no prior criminal record.  She worked at a local hospital and had done so for over twenty years.

Our client then was served with a letter from the Los Angeles Superior Court, enclosing a complaint warrant to present herself to the Airport Courthouse for further proceedings.  She then called our office.

Before our client went to court, she called Greg Hill & Associates and spoke with Greg about what had happened.  Greg Hill then called the handling district attorney assigned to the case to find out how he planned on approaching the case.  The district attorney advised that since the amount in controversy was over $10,000, his offer would necessarily involve at least one year in prison.

Greg Hill notified the client of this rather sobering reality and urged our client to arrange for a second mortgage on her home, or some other loan, to pay down the debt owed to the VA to under $10,000.  The client immediately took action in this regard, getting a second mortgage on her home, as she supported several children on her single-income salary and needed to continue working for her kids.  Greg Hill then notified the VA of the second mortgage to help them feel more comfortable as to how the case would proceed for the client. 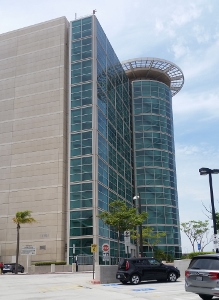 Airport Superior Courthouse Near LAX
The client and Mr. Hill then appeared in the Airport Courthouse and continued the arraignment until the funds from the second mortgage could be accessed and paid to the VA to have the outstanding balance drop below $10,000.

Greg Hill then negotiated a deal with the DA that provided the VA with payments of $200 per month for 49 months.  No interest was added to the balance.  Our client was very happy to avoid prison, not to mention an interest-free payment plan that she could complete.

In entering the plea of no contest to felony grand theft, our client plead in the open.  The judge took pity on our client, sentencing her to ninety days of community service and five years of formal probation.  He commented that essentially, our client had received a $40,000 interest free loan for four years and would be paying it off interest free as well.

The judge also promised that if our client made all payments on time, or even ahead of schedule and otherwise completed all terms of probation, he would then dismiss the case under Penal Code § 1203.4 (“expungement”).

On the record, in an unusual gesture, both the District Attorney and the judge complimented Greg Hill for his handling of the case and the disposition reached to prevent the client from spending any time in custody.