Home
Other Information
Criminal Defense Articles
Can a Minor Violate PC 148(a)(1) in a Warrantless Detention?

Can a Minor Violate PC 148(a)(1) in a Warrantless Detention?

Why This Article Matters: A minor can be found in violation of obstructing, delaying or resisting a police officer when being held at a police station while awaiting her mom to pick her up after she was cleared as a suspect in an auto theft case.

In the early evening hours one January evening in Barstow, Deputy Slawson was asked by a fellow deputy to watch a juvenile he had detained during a stolen vehicle investigation.  Slawson was asked to keep an eye on her until her mom picked her up.
The Barstow Sheriff’s Department had a policy that required minors in sheriff’s custody to be kept at the station for their safety until they could be released to their parents or another authorized adult.  R.W., the minor under Slawson’s supervision, had been cleared in the investigation and no charges were going to be filed against her.
Slawson took the minor to the report writing room and instructed her to have a seat until her mom arrived.  As Slawson was sitting there, the minor told Slawson that she stole the car and wanted to speak to the deputy who made the initial traffic stop and who arrested the driver (and not her).  Slawson then asked her several questions about the theft and realized the minor was lying to make herself a suspect.  Slawson told her she did not need to lie to make her a suspect.
This upset the minor, so much so that she grabbed her bags and walked out of the room.  Slawson instructed the minor to return to the room, but the minor refused.  Slawson then grabbed the minor by her arm as she was about to exit into the parking lot.
The minor then pulled away and proceeded towards the exit.  Another deputy, a female, then came to assist Slawson and a third deputy also helped.

They then handcuffed the minor, who kicked and resisted.  She was then taken back to the report writing room, where she calmed down.  After ten minutes, the sheriffs removed the handcuffs and fifteen to twenty minutes later, the minor’s mom arrived. 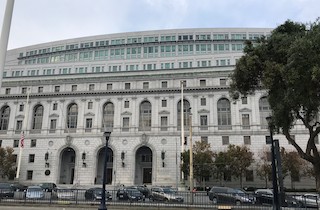 Court of Appeal First Appellate District San Francisco
Slawson issued the minor a citation for resisting a police officer, a violation of Penal Code § 148(a)(1), a misdemeanor.  A juvenile court judge then found the allegation true and the juvenile appealed to the Fourth Appellate District.
The minor argued that there was insufficient evidence to support the finding because her custody was unlawful at the time the deputy restrained her from leaving.
Penal Code § 148(a)(1) makes it a misdemeanor for anyone “to willfully resist, delay or obstruct any peace officer . . . in the discharge or attempt to discharge any duty of his or her office.”  To sustain a true finding for this offense, there must be proof beyond a reasonable doubt that the officer was acting pursuant to his or her lawful duties at the time the resistance took place.  In re Joseph F. (2000) 85 Cal. App.4th 975, 981.  If the minor’s detention was unlawful, there can be no violation of 148(a)(1).
The minor challenges the legality of her detention once she was cleared of the stolen car investigation.  So the critical analysis in the appeal is whether the deputy’s prevention of the minor leaving was within the deputy’s lawful duties.
The Fourth Appellate District ruled that such duties did include keeping the minor at the station.  The appellate court in this case (People v. R.W. (2018 DJDAR 5440)) noted from the outset that warrantless arrests of juveniles are not viewed in the same light as similar adult detentions.  Alfred A. v. Superior Court (1994) 6 Cal.4th 1212, 1215.  Indeed, Welfare & Institutions Code § 625 permits a peace officer, without a warrant, to take a minor into temporary custody when that minor is under the jurisdiction of the juvenile court.  See also § 602 of the Welfare & Institutions Code.
Here, the minor was under investigation for a stolen vehicle.  However, once she was cleared as a suspect, she remained under the Department’s custody pending the arrival of the minor’s mother. The appellate court found such a short detention neither unreasonable nor unlawful.  There is nothing in the language of Welfare & Institutions Code § 626 that requires the release of a minor to be unconditional.  Case law, notably In re Ian C. (2001) 87 Cal.App.4th 856, 859-860 and In re Charles C. (1999) 76 Cal.App.4th 420, at 427, allow such a temporary protective custody of a minor.
Accordingly, the trial court’s finding was sustained.
We offer this summary for two reasons.  First, teenagers can be rebellious and given a small amount of knowledge, they may combine this unruliness with the knowledge in a misguided way.  Second, it is common for police to hold onto a suspect who is a minor until a parent arrives and this commonly causes the minor to allege false imprisonment.
The citation for the Fourth Appellate District Court ruling discussed above is ordered not to be published or relied upon or cited by parties in filings with any court under California Rules of Court, Rule 8.1115(a).
For more information about resisting arrest as a misdemeanor and a felony, please click on the following articles:
Contact us.