Our client, age 33, was traveling home from attending to an elderly client in Beverly Hills.  It was only about 8:15 a.m.  Our client was a home care medical specialist who had just received his Emergency Medical Technician (EMT) card the prior day and was just about to begin a new job as an EMT.  He was quite excited about this, as he had worked his way up from being an ambulance driver for several years.
As he was driving his 2002 Chevy Tahoe southbound on La Cienega Boulevard approaching Olympic Boulevard, he spotted a police officer traveling the opposite direction on La Cienega.
The police officer, from the Beverly Hills Police Department, stared at our client for a long time, getting eye contact with our client.  This made our client feel nervous.  Sure enough, as he watched the police car in his rear-view mirror, the car made a U-turn and accelerated rapidly toward our client with his overhead red and blue lights flashing.
The cop pulled in behind our client and our client pulled over.  The officer immediately asked for our client’s driver’s license, registration and proof of insurance, which our client produced with no problem. 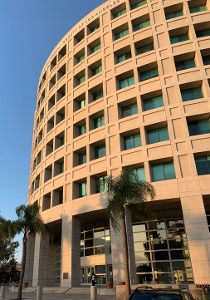 Airport Courthouse
The cop never told our client why he had pulled over our client, but he asked our client if he could look inside the car.  Our client agreed and the cop went into the driver’s seat area, promptly finding a folded-up baggie with a white powdery substance jammed into a space below the car’s radio.  The cop then took a picture of it, using his cell phone.
The cop then pulled out the baggie and asked our client if he knew what the white powdery substance in the baggie was.  Our client admitted that it was meth and even told the officer that he had used a small amount the prior day.
The officer also ran our client’s registration and discovered on his police car’s computer that the client’s vehicle registration had expired, a violation of Vehicle Code § 4000(a)(1), and that our client’s insurance had lapsed as well.  He advised our client of these two things.
The officer then arrested our client for possession of a controlled substance and transported him to the Beverly Hills Police Department, where our client was booked and released on his own recognizance after signing a promise to appear in the Airport Courthouse for his arraignment in about six weeks.
The client returned home and told his new wife of one year about what had just happened.  He was ashamed and nervous of what such an arrest and a conviction for possession for a controlled substance such as meth (a violation of Health and Safety Code § 11377(a)) would do for his hard-earned EMT certification.  The couple also had a six-month old baby and the family needed his anticipated income as an EMT to keep them afloat because our client’s wife did not work.
Making matters more dire to our client was the fact that our client had a prior DUI from 2013.  Our client had read on the Internet that diversion is usually afforded to a first-time offender on a drug case if the client has no prior criminal history, so the client was concerned he would suffer a conviction instead of having the case handled through diversion.
The client then called up Greg Hill & Associates and spoke with Greg about his predicament.  Greg listened to the client explain his situation and how the police officer never told him why he pulled him over.  Greg also explained that sometimes, the DA will offer diversion to a client despite the client having a prior criminal history if the client seems to be taking the matter seriously, i.e. he or she goes to Narcotics Anonymous (NA) meetings prior to the arraignment and brings an attendance sheet from the NA meetings showing this and there are other factual issues from the case suggesting there is a problem with the case.
The client then immediately attended 10 NA meetings, gave Greg a copy of his EMT certification and his updated vehicle registration and insurance documentation.
Greg then went to the Airport Courthouse for the client’s arraignment armed with documents to show the prosecutor to hopefully persuade him that DA diversion for our client should be offered despite his prior DUI conviction.
Greg first looked through the police report and found that the police officer claimed he pulled over our client for expired registration on his car, which was impossible because the cop only discovered this after stopping our client and running his license plate on his police car’s computer.
Greg then discussed this with the prosecutor and showed him our client’s EMT license as well as his proof of attending ten NA meetings.  Greg also showed him that our client had rectified his vehicle registration and auto insurance.
The prosecutor was very happy with this due diligence by our client and agreed to make an exception to the general police of DA diversion being limited to first-time offenders.  He agreed to offer our client DA diversion wherein he would earn a dismissal in six months if he attended 52 NA meetings and stayed out of trouble.
Greg returned to the office and told the client the good news.  The client was extremely happy with this handling of his case, as his young family’s financial dependence on him was dependent upon him working as an EMT, which our client could now do by avoiding a conviction for anything in this case.  He was greatly relieved and appreciative.
For more information about possession of a controlled substance and diversion, please click on the following articles:
Contact us.