The following case summary is not an exercise in bragging, as many of our case summaries may seem to be.  Rather, this summary is more of a cautionary tale to illustrate how a DA’s office at one courthouse can decide to resolve all of its prostitution cases without diversion.
Over the years, especially in certain courthouses, the norm because that if one was cited for solicitation of prostitution as a first-time offense, one would be referred to a prostitution diversion program (PDP) with an AIDS / HIV test and, if one completed the class and remained free of trouble for six months or a year, or maybe even less, the case would be dismissed.
The following case out of the Bellflower courthouse defied such norms, as this case exemplified. Our client, age 40, responded to an advertisement on CityXGuide.com or SkipTheGames.com (these two websites appear to be offering the same services as Backpage.com for prostitutes after Backpage.com was shut down).  He texted a phone number provided there to a police decoy posing as a prostitute.
Our client was an auto mechanic with two prior DUI convictions from nearly twenty years earlier.  He was single and had never been married.  He had earned a college degree from the University of La Verne in public administration.  He had a certification in welding. 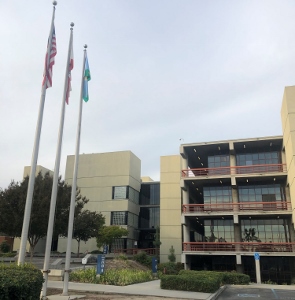 Our client texted the phone number provided by a photograph of a blond, young-looking woman.  He asked if she was available and she texted him back saying she was.  He asked if she offered “full service,” a common term used to describe oral copulation followed by sexual intercourse.  She said she did and asked how much money he had.  He said $100 and she agreed.  She then instructed him to meet her in Room 1001 at the Budget Inn on Clark Avenue in Bellflower.
Room 101 was what police describe as a “take down” room.  Our client then drove to the Budget Inn in Bellflower.  It was late January, and a Friday night just before the Super Bowl.  It was about 7:30 p.m. at night.
After our client parked his car in the parking lot of the Budget Inn, he walked to Room 101 and knocked on the door.  A woman who was not blond and did not appear at all like the woman in the advertisement answered the door and asked for our client to enter quickly, which he did.
Once inside the room, two big police officers from the Lakewood Sheriff’s Department emerged from the room’s bathroom to greet our startled client.  They immediately blocked the door for him to leave and handcuffed him.  They then searched his pockets and found $100 in twenty-dollar bills.
Our client was then taken to the Lakewood Sheriff’s station and booked.  He was then released after signing a promise to appear in the Bellflower courthouse in about two months.
Once the client was released, he called Greg Hill & Associates and met with Greg the same day, a Saturday.  The client explained what had happened to him and wanted to know what would happen to him.  Greg explained that he had never seen a prostitution matter in the Bellflower courthouse, but described how the local police departments have taken action recently to set up stings to make a couple dozen arrests in the pretext of combating human trafficking.  Such sting operations are usually good publicity for the local police and suggest they are keeping the neighborhoods safe.
Greg then explained how he had resolved dozens of other such cases in nearby courts and how he hoped to resolve the client’s case.
Unfortunately, the head DA in the Bellflower courthouse did not offer diversion of any type for the three dozen or so cases resulting from the prostitution sting our client was arrested in.  We know this because of frank conversations with the handling DA’s in the courtrooms and because we received calls from other “Johns” who were similarly frustrated by such tough treatment.
Over several months of negotiating, our office was finally able to resolve the case with a plea to Penal Code § 647(b), solicitation of prostitution, with three years of informal, or summary, probation for our client contingent upon his performing five days of approved community labor and paying a court fine of $150, plus penalties and assessments (less credit of $150 toward the base fine for his one day in custody).
Such terms were only worked out after much effort in submitting a Defense Position Letter with a mitigation packet from our client to the head DA at the Bellflower Courthouse and many suggestions to resolve the case instead as trespassing or disturbing the peace, to avoid the scarring effects for our client that a conviction for 647(b) would cause, even if our client later had the conviction expunged.
For more information about prostitution issues, please click on the following articles:
Contact us.
Serving Torrance, Long Beach, Compton, Airport Courthouses and Other Courthouses.