One is ineligible for drug diversion programs, i.e. Proposition 36 or PC 1000, if that person was engaged in the sale of a controlled substance (illegal drugs).  Such programs are meant to treat addiction issues and return the person to society with the skills to fight addiction and perhaps overcome it or manage it.  Prop 36 and PC 1000 are for folks arrested for simple possession of a controlled substance.

The possession of a controlled substance for the sale of drugs, however, is seen as far more serious because it involves the financial advantage enjoyed by someone who enables another to develop a chemical dependency, an addiction that can lead some people to commit theft to satisfy the addiction or other crimes while under the influence.  In other words, sales is a completely different and more serious crime.  It is more destructive and predatory.

However, it is well known that many addicts fund their addiction by engaging in sales.

Our client, age 26, with no prior criminal history of drug use or sales was arrested with seven packets of a white substance in his pocket.  This alone was not conclusive evidence of an intent to sell (as compared to having one hundred such packets), but our client also had numerous text messages on his cell phone evidencing many sales, as well as nearly $800 in small bills (i.e. tens, five and twenties).

When arrested, he admitted to police that he intended to sell the white substance as cocaine, although only half the packets were actually real cocaine.  The other half were baby powder that he intended to sell as cocaine to an unsuspecting buyer, which he also admitted, perhaps in a misguided attempt to demonstrate candor to the police and be let go as a reward for his honesty.

It is not uncommon for addicts to support their habit through sales, as was the case with our client.  Our office had previously represented this client in an unrelated felony in another courthouse and had the case fully dismissed with no plea bargain of any sort.

Greg Hill worked with the client’s family to enroll him in an inpatient (residential) treatment program, which the family did. 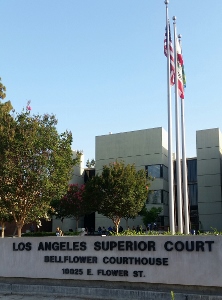 Bellflower Superior Courthouse
However, the District Attorney assigned to the case (the case was transferred from Bellflower to the Early Disposition Program (EDP) court in Downey) in Downey would not agree to any diversion program.  She chafed at our client’s enrollment in a drug treatment program because she saw the case as quite serious, due to our client selling bunk.

She seemed to take a personal interest in the case, commenting that attempting to sell bunk, let alone admitting this to a police officer, showed our client was extremely dangerous and perhaps even cavalier about it.  She had handled more than one case wherein a person died from ingesting bunk, believing it was something else.  When the pre-plea report came out, stating that our client was ineligible for diversion, she offered four years in state prison to our client.  It was a “take it or leave it” offer that she did not intend to lower.

Greg Hill then set the matter for a Preliminary Hearing and had the case sent back to Bellflower.  Once in Bellflower, Greg approached the judge assigned to the case and once again sought diversion for the client, explaining that the sales were really just a manifestation of our client’s attempt to fund his addiction.  In other words, this case was really just a case for possession of a controlled substance, which was eligible for diversion.  The judge agreed and the client promptly agreed to such a plea bargain, pleading no contest to sales, but being resolved with diversion and a residential drug treatment program.  This was definitely a lucky turn of events.

When our client finishes the drug treatment program, his case, alleging sales of cocaine, will be dismissed.  This was a very fortunate and, really, simply lucky disposition.

For more information about drug diversion programs and probation conditions for drug offenses, click on the following articles:
Watch our Video about Drug Offenses by clicking here.