Please click on the bail reduction case summaries below to read a detailed description of each case.

Reducing or eliminating bail, as the above case summaries show, can be a tough thing to do.  A judge is mindful that if he or she reduces bail enough so that the defendant is able to post bail and then commits more crimes, the judge may be blamed for the crimes.  No careful judge wants to be characterized as “soft on crime” or enabling a dangerous individual to break more laws, especially if the crimes involve violence or theft.

Likewise, no judge wants to allow a person in custody to leave jail and then flee the U.S. or simply never return to face justice.  A victim may be extremely upset by this.

A prosecutor will usually not remind the judge of these issues, but will usually emphasize that the underlying offense was serious and that bail should be increased or maintained so that defendant remains in custody.  In this regard, the reader of this should understand that for purposes of setting bail, all allegations are considered true, which can be quite frustrating.

We will also want to describe our client’s ties to the community and the fact, if available, that the client has no family outside the immediate local area, i.e. in Mexico or outside California.  If the client has a passport or visa (or both), we will offer to tender them to the court clerk for safekeeping during the pendency of the case if our client is released.

Our office usually does not contest the facts of the police report, but will tell the judge that we understand that for purposes of setting bail, the police report is deemed true, however, there are certain other facts that must be considered. 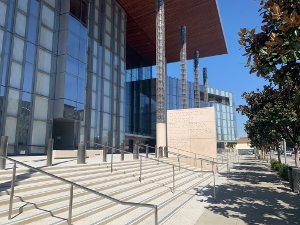 Governor George Deukmejian Courthouse in Long Beach
These other facts may be defenses that apply or significant mitigating facts.  This must be done carefully and not in the context of contesting the police report, but only for the judge to also consider.

Such arguments are all presented to the judge’s attention to address the two often conflicting considerations for setting the amount of bail under Penal Code § 1275: public safety and the likelihood of defendant returning to court.

Indeed, the only way to ensure public safety in setting bail is to deny bail altogether (or set it so high that defendant cannot post it).  Thus public safety is really not so much a euphemism for denying bail.

Secondly, we all know that if someone other than defendant offers check, a house or car(s) or all of these things as collateral to be forfeited if one does not appear in the future in court, the setting of bail to ensure a future appearance is meaningless.  The defendant has nothing to lose, the judge will understand.  If the judge is sensitive to this reality (most defendants do not have much to post for bail), it is important for our office to address this issue if the client must repay the money to a spouse or parent.

We find that with such realities in mind, the real issue is simply whether or not a judge will release someone back into the public due to public safety.

Academically, our office will sometimes comment to a judge receptive to academic arguments that safety to the public actually is not a proper criteria for consideration because of the way Penal Code § 1275 was enacted.  However, most judges are not willing to entertain such arguments, let alone disregard public safety even if the judge appreciates that in a strictly legal sense, public is really not a valid ground for setting bail.