Our client and her girlfriend had an odd relationship.  Our client, age 40, was a Pilates instructor.  She enjoyed being fit and thin.  She was petite – being just five feet, two inches tall and 100 pounds.  Her girlfriend, in contrast, was six feet, two inches tall and well over 200 pounds.
She was also fifteen years younger, very strong and a longshoreman.  The two shared a house in Harbor City, near Wilmington.
For some reason, the younger woman became oddly jealous that our client was having a relationship with a new woman and decided to install video cameras inside the home and changed the locks on the doors to the home.  Our client was not having any such new relationship outside the exclusive relationship she had already with the younger woman.
The younger woman’s suspicions became obvious and so our client confronted her about this, saying there was no third woman.  The younger woman did not trust our client and eventually the two argued and the argument became a physical altercation, which our client lost.
Ironically, however, the older woman called the police and our client was arrested for domestic violence.  She was taken to the Los Angeles Police Department Harbor Division station and released after providing a DNA sample and spending several hours there.  She was only released after signing a promise to appear in the Long Beach courthouse about six weeks later.
With the help of the police accompanying her, she then moved out of the shared home in Harbor City and relocated to Las Vegas, knowing she would have to return to Long Beach for her criminal case.
After moving to Las Vegas, she hired a well-known attorney in the Torrance area who did a great job having the Long Beach matter resolved through an office hearing and no case was ever filed. 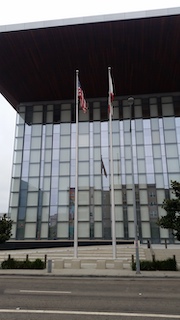 Long Beach Courthouse
However, when our client asked the well-known attorney about sealing the police report and having her DNA sample destroyed, that well-known attorney referred the client to Greg Hill & Associates.
The client called Greg Hill & Associates and spoke with Greg Hill.  Greg explained how there was a relatively new law at Penal Code §§ 851.91 and 851.92 that provided for sealing and destroying of not only the police report when no case was filed, or when a case was filed, but later dismissed under Penal Code § 1385, or the defendant acquitted at trial, or the conviction took place, but it was later reversed or vacated on appeal.
Greg further explained that the law on sealing and destroying had certain exceptions for cases involving domestic violence, child abuse or elder abuse and then discussed whether the client had a “pattern” of domestic violence matter, as specified in § 851.91(C)(2)(A)(i)(I).  “Pattern” is defined as “two or more convictions or five more arrests, for separate offenses occurring on separate occasions with three years from at least one of the other convictions or arrests.”  851.91(c)(2)(A)(III)(ii).  Here, our client had no prior or even subsequent arrests or convictions for anything, let alone domestic violence.
Greg also explained the law at Penal Code § 299 allowing expungement of one’s DNA profile and sample after a case had been dismissed or not filed after an arrest wherein DNA was taken.
Greg Hill & Associates then filed the petition to seal and destroy the police report, as well as any court records, at the Long Beach Superior Court.  We also served the Long Beach City Prosecutor’s Office and the arresting agency, the Harbor Division of the Los Angeles Police Department, as required by the new law.
The judge assigned to the matter granted the petition in chambers without even a hearing.
On the Petition for Expungement of DNA Profiles and Samples (provided for under Penal Code § 299), Greg Hill & Associates also filed the petition, served the prosecuting agency, the Long Beach City Prosecutor’s Office and the arresting agency, the LAPD, Harbor Division.  The judge assigned to this matter set a hearing on the petition.
Greg Hill then appeared at the Long Beach Superior Court for a hearing on the petition for destruction of the client’s DNA sample and profiles, which the judge granted as well.
The client was happy with both results.
For more information about sealing and destroying a police report, please click on the following articles:
Contact us.
Serving Torrance, Long Beach, Compton, Airport Courthouses and Other Courthouses.