Writ of Coram Nobis Denied When No New Fact Presented.

In most matters involving appeals and post-conviction relief, judges demand disciplined arguments that stay within the scope of the relief allowed.  Judges likewise are strict in requiring that any arguments made rely upon proper evidence or law to guard against our appeal process and post-conviction relief dissolving into a forum for just any argument.   After all, respect for our legal system relies upon not only its fairness, its rigor and the finality of judgments when required.

Brief Synopsis: A petition for writ of coram nobis (or coram vobis if addressed to an appellate court) cannot ask for reconsideration of a denied petition for factual innocence.

The following case summary exemplifies how a court will protect its procedures so that a person does not get an unfair advantage over others who follow the rules.
On November 8, 2006, Robert Forest pointed a handgun at the head of an African-American man named Stanley Douglas outside the Tip Top Lounge on North Franklin Street in Fort Bragg.  A witness saw Forest yelling obscenities at Douglas and holding Douglas by the back of his shirt with one hand and holding the barrel of the gun to Douglas’ head with the other hand.  Forest yelled at Douglas, “Don’t mess with me!” and “Don’t fuck with me!”
Forest then let go of Douglas and he walked away.  Forest got on his motorcycle and drove away.  A bystander called 911 and Forest was arrested the next day.
The Mendocino County District Attorney’s office charged Forest with felony assault with a deadly weapon, Penal Code § 245(a)(2).  Following a preliminary hearing, Forest was held to answer in superior court.  Forest then filed a motion to set aside the information under Penal Code § 995, which the judge denied.  Forest’s main argument was that he acted in self-defense.
However, the prosecution dismissed the case for insufficient evidence.
Ten months later, Forest filed a petition for a finding of factual innocence under Penal Code § 851.8.  In support of the petition, he submitted a declaration from himself setting forth his version of events.  He also submitted a declaration from another alleged witness who corroborated Forest’s claim of self-defense.  The trial court denied the petition. 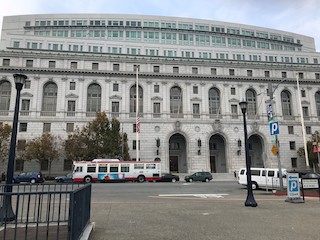 Court of Appeal First Appellate District San Francisco
Forest then appealed to the First Appellate District, which affirmed the trial court.
Forest then appealed to the California Supreme Court, which denied review.
Forest then appealed to the U.S. Supreme Court, which denied certiorari.
Six years later, Forest filed a Petition for Writ of Error Coram Nobis and For a Finding of Factual Innocence in the Mendocino Superior Court, seeking to vacate that court’s prior judgment finding against him in the original factual innocence matter.
The petition was then given to the First Appellate District to review.  It noted that there was no conviction to collaterally attack (or vacate as is the purpose of a writ of error coram nobis) because the charge of violating Penal Code § 245(a)(2) was dismissed.
The First Appellate District then explained that under Penal Code § 1265(a), if a judgement of a trial court is affirmed on appeal, a writ of coram nobis (actually called a writ of error coram vobis if filed in the appellate court) must be filed in the appellate court that affirmed the trial court, not the trial court.
The First Appellate District then turned to the writ for petition of error coram nobis, which included a statement made by the former district attorney explaining that she dismissed the case because “he did not commit an assault upon an unarmed man with a gun.”  The statement was not sworn under penalty of perjury and was part of a settlement that the county made with Forest for defamation.
The writ also included a sworn deposition of a police officer who described how Forest explained using self defense and a stipulation of the current district attorney to a finding of factual innocence.
The appellate court noted that the former district attorney’s unsworn statement was not a fact at all, but a legal opinion, which is not allowed for consideration is a writ of coram nobis.  After all, the function of a writ of coram nobis is to correct an error of fact.  It never issues to correct an error of law.  People v. Reid (1924) 195 Cal. 249, 258.  The former district attorney was not a percipient witness to the event at all.
Second, the comment of the police officer was not known to Forest when the case was being tried, so it is not the type of new fact that a writ of coram nobis is allowed to consider.
Third, as to the stipulation of the current district attorney to a finding of factual innocence, the appellate court declined to find it was a new fact.  It is a legal opinion, purely, for certain.
Consequently, Mr. Forest’s writ of coram nobis was denied.
We present this summary as a cautionary tale about the legal process.  We think that since the former district attorney moved to dismiss the case, Forest should have instead insisted upon a bench trial wherein the case could have been called and then the judge would have found in favor of Forest.  This would have been the smarter thing to do.
Then an 851.8 petition would have been granted instead, preventing all the appellate gyrations that Forest then created, none to his benefit.
The citation for the First Appellate District Court ruling discussed above is People v. Robert Forest (1st App. Dist., 2017) 16 Cal. App. 5th 1099, 224 Cal. Rptr. 3d 827.
For more information about issues, please click on the following articles:
Contact us.