Our client and his neighbor had garages that faced each other such that when one neighbor backed out of his garage, he or she had to be careful not to bump the other neighbor’s garage door.  The distance between the two garage doors was about thirty feet.

In 40 Words or Less, What Happened:  Our client defeats neighbor’s request for a restraining order arising over their respective garage doors opening “into each other” and our client allegedly threatened the much larger neighbor.  The judge in Long Beach understood the request was a misguided effort to get a vote from a judge about who was more at fault.

Our client, meanwhile, attempted to curtail the tension by seeking assistance from the homeowner’s association.  This only infuriated our client’s neighbor more, so she filed a request for a restraining order.

In the order, she fabricated a story that our client was a constant physical menace to her and that our client, described as six feet, one inch tall, needed to stop reporting her to the homeowner’s association, as it was harassing her.

Greg Hill of our office pointed out, by showing the court our client’s driver’s license, that he was not six feet tall, but eight inches shorter.  Greg also pointed out that our client worked 30 days out of every 31 days north of San Jose at Mather Air Force Base, so he certainly could not be a “continuous” presence, let alone a menace.  Lastly, he pointed out that the Litigation Privilege (Civil Code § 47) protected his contact with the homeowner’s association as long as it was in good faith, which the neighbor could not dispute.  The neighbor also failed to allege there was any threat of future harassment. 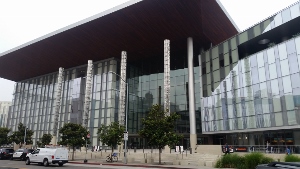 Governor George Deukmejian Courthouse
The court in Long Beach recognized the request for a restraining order for what it was – a misguided attempt to reciprocate harassment to our client for her husband’s arrest.  The court also pointed out that security cameras are a constant presence everywhere and the right of privacy is not meant to protect illegal conduct, especially if the conduct is in public view as it would be anyways if one were to simply look into the neighbor’s open garage.

Our client was relieved that the judge denied the neighbor’s request for a restraining order.