The myriad of consequences following a DUI is quite numerous.  Vehicle Code § 23247(e) makes it a crime for a person who has a restricted license due to a DUI conviction to operate a motor vehicle (i.e., a rental car or friend’s car) without a functioning ignition interlock device (IID).  Previously, as the reader of this website may know, driving without a functioning IID, if one was restricted to driving only when the car is equipped with an IID, was considered a probation violation.  Now, this is a new crime with defined punishment.

The Gist of this Article: Vehicle Code § 23247(e) makes it a crime for a person who has a restricted license after a DUI conviction to operate a motor vehicle without a functioning ignition interlock device (IID).

It merits mention that this new offense, effective January 1, 2019, is distinguishable from a violation of Vehicle Code § 14601.2(a), which makes it a misdemeanor to drive while one’s license is suspended or revoked due to a DUI.  A license can be suspended or revoked either by the DMV following an admin per se hearing (wherein one can obtain a restricted license thereafter without the requirement to install a functioning IID) or a conviction in court for a DUI (after which, to obtain a restricted license, one must install a functioning IID).
It also merits mention that this crime emphasizes the description of the IID as “functioning,” meaning it must be operational and not tampered with in any way.
The punishment for being convicted for violation of Vehicle Code § 23247(e) is up to six months in jail and payment of a fine of up to $5,000, plus penalties and assessments that can make the fine over $20,000.  In addition, the DMV will terminate the restricted license privileges and suspend the offender’s driving privileges.
It should be noted for the reader that if this is first-time offense, informal or summary probation is likely to be how this violation is handled, perhaps with a short amount of jail time and/or community service as a term of probation.  There also may a court fine and if the person was arrested, a booking fee to pay.
The police usually pull over the motorist for an unrelated reason, i.e., speeding or some other Vehicle Code violation and then notice that the driver has a license restricted due to a DUI conviction, but then look at the car to discover there is no IID installed.  Thus, a false accusation of 23247(e) may be hard to argue unless someone else reports such a violation to the police (i.e., an ex-wife or ex-girlfriend), who then may seek to confirm this before issuing such a citation. 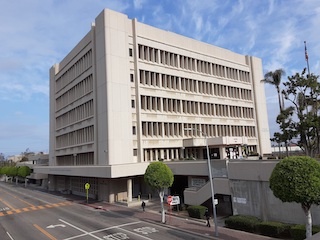 Inglewood Court
A sub-category of being falsely accused is where there is a situation of mistaken identity, where someone else, who perhaps may not have a driver’s license at all, gives the police a false name and that person has a recent conviction for DUI and a restricted license, meaning an IID must be installed on the car, but it is not.
The second defense which is more viable is necessity, i.e., there was an emergency situation and the driver had to use a car without an IID to respond or mitigate the emergency.  Proof of the emergency situation must be established, naturally, but this defense should not be overlooked.
A third defense really distills down to a mistake made by the police in believing that the suspect had a conviction for DUI when in fact, the driver may have only had his license suspended by the DMV following a DUI admin per se hearing.  As mentioned above, after a DMV admin per se hearing, the driver’s license may be suspended, but the driver can obtain a restricted license from the DMV without any obligation to install a functioning IID after a waiting time period, also known as a “hard suspension” period.  It is only after a conviction (in court) when an IID installation becomes a requirement to obtain a restricted license (and there is no waiting time period required).
A violation of this Vehicle Code section is not a crime of moral turpitude affecting immigration rights and it has no affect on one’s Second Amendment right to own, possess or buy a firearm.
For more information about ignition interlock device issues, please click on the following articles:
Contact us.
Serving Torrance, Long Beach, Compton, Airport Courthouses and Other Courthouses.