Home
Other Information
Criminal Defense Articles
What is Penal Code § 17500 Regarding a Deadly Weapon?

Penal Code § 17500 makes it a misdemeanor, punishable by up to six months in county jail and/or a court fine of $1,000, for “having upon the person any deadly weapon, with intent to assault another.”  Informal, or summary, probation may also be offered in lieu of jail, but perhaps with anger management classes, community service, Cal-Trans labor and / or a smaller amount of jail than six months.
This is a relatively new law, made operative only in 2012.

In a Nutshell: Penal Code § 17500 makes it illegal to have in one’s possession a deadly weapon with the intent to assault another.  It is a misdemeanor punishable by up to six months in county jail.

As a criminal defense attorney, we regard this Penal Code section, as an attractive alternative to offer in plea bargaining to more serious crimes that are felonies or that, if misdemeanors, require a certain mandatory minimum jail term.  This may be an important consideration for someone with immigration issues wherein the maximum punishment is considered by an immigration court and in professional licensing, wherein the fact that a crime is a wobbler carries with it more significant consideration is suspending or revoking a license such as that of an attorney, doctor, accountant, real estate broker, dentist, etc.
First, however, it should be understood that the definition of a deadly weapon includes a wide spectrum of items.  It is not limited to a firearm or knife.
In the caselaw interpreting what exactly is a deadly weapon in the context of assault with a deadly weapon, for example, a butter knife, which is quite dull, nonetheless could be considered a deadly weapon if it were used in a manner to cause serious injury or death.  More generally, People v. Lochtefeld (2000) 77 Cal.App.4th 533, 538 stated that for purposes of Penal Code § 245, a deadly weapon is “any object, instrument, or weapon which is used in such a manner as to be capable of producing and likely to produce, death or great bodily injury” (internal citations omitted). 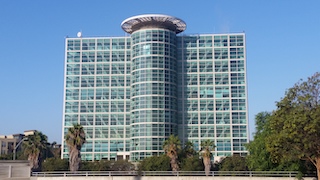 Airport Courthouse
The term “having upon the person” does not mean only holding a deadly weapon.  It can mean having the weapon in one’s pocket or even carrying it in one’s backpack or purse so as to have ready access to it.
The intent to assault can be established most simply by a statement such as “I’m going to make sure XYZ understands we don’t appreciate . . .” and holding the weapon while walking toward or readying to find XYZ.  However, it can also be proven by one’s location, i.e., trespassing or stalking outside a home of a known enemy, especially if uncooperative with police, while holding a deadly weapon or having it in one’s pocket.
One must have knowledge of having the weapon to violate § 17500.
We regard § 17500 as an excellent consideration for alternative plea when one is charged with brandishing or exhibiting a weapon (Penal Code § 417) to cause fear in another person to avoid 417’s mandatory minimum sentence of 90 days in county jail.  Section 417 can also be charged as a felony and when it is so charged, a plea to § 17500 may be too much of a stretch for some prosecutors to consider.  A second plea to misdemeanor 417 also results in one losing his or her Second Amendment rights for life, so a 17500 plea may be attractive to avoid losing such rights.
Section 17500 is also a good alternative plea for a person charged with Penal Code § 245(a)(1), assault with a deadly weapon, Penal Code § 245(a)(2), assault with a firearm, or Penal Code § 245(a)(4), assault by means likely to cause great bodily injury.
This would be possible if the facts of the alleged assault are weak, i.e., the “victim” was not reasonable in claiming he or she felt anxiety or fear of immediate injury from defendant.
Section 17500 likewise may be an alternative plea to a charge of violating Penal Code § 25400, carrying a concealed firearm on one’s person or in his or her vehicle.  The firearm can be loaded or unloaded.  This charge is a wobbler and when charged as a misdemeanor, it carries a maximum sentence of 364 days in county jail and / or a $1,000 fine.
Lastly, § 17500 can be a particularly good alternative to a plea of criminal threats (Penal Code § 422), which can be a wobbler and, when charged as a felony, a strike offense.  When charged as a misdemeanor, punishment can be up to 364 days in county jail.  When charged as a felony, it is not only a strike, but it can include up to four years in county jail.
For more information about assault with a deadly weapon and possession of a deadly weapon, please click on the following articles:
Contact us.
Serving Torrance, Long Beach, Compton, Airport Courthouses and Other Courthouses.