Home
Other Information
Criminal Defense Articles
What Is Meeting a Child for Lewd Purposes (PC 288.4)?

Meeting a child for lewd purposes conjures up the image of a grown man preying upon a teenage girl who is naively curious about sex. Dateline NBC famously ran a series wherein dozens of men, often married and with careers, were caught on tape bringing flowers and chocolate to a home, only to be confronted by Stone Phillips of NBC on camera, to their great humiliation and shame. The men were characterized as “predators.”

The Reader’s Digest Version: Penal Code § 288.4, meeting a child for lewd purposes, can be a felony or a misdemeanor. The most punishing element of being convicted of the crime is the potential obligation to register for life as a sex offender under Penal Code § 290, although the recent passage of Senate Bill 384, signed into law by Governor Brown in October, 2017, changes the sex offender registration requirements.

Our office has represented many clients in similar circumstances. Usually, our client strikes up a conversation online with a police decoy posing as a thirteen year old in search of adventure. The police decoy very clearly explains her age and our client acknowledges her age, sometimes even asking for pictures. The decoy then expresses anxiety about getting pregnant, having her parents discover her new “boyfriend,” and whether the sex will be unpleasant. She then suggests a meeting, perhaps at a local Taco Bell or Barnes & Noble, and our client agrees. The client then goes to the location, often with condoms. He is then met by plain-clothes police who arrest him. The client often never sees the decoy.

The entire online conversation is recorded. 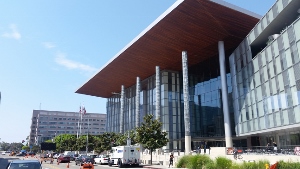 Long Beach Courthouse
Our client’s conduct certainly may be a violation of Penal Code § 288.4. Section 288.4 prohibits a person from arranging a meeting with a minor (someone under 18) or someone the person believes to be a minor if the meeting is motivated by an unnatural or abnormal sexual interest in children and for the purpose of engaging in lewd or lascivious conduct. The prosecutor must prove this “motivation” by showing that the defendant had the specific intent to expose his genitals or rectal area or have the child expose the same areas of her body. “Lewd or lascivious conduct” means, at the least, any touching of the body with the specific intent to arouse or gratify the sexual desires of either party. This can be a massage. It is not necessary that bare skin be touched. The touching can be through the clothes.
Penal Code § 288.4 is a “wobbler,” meaning it can be filed as either a misdemeanor or a felony, depending upon the facts of the case and the client’s criminal history. It is most often filed as a misdemeanor if the defendant has absolutely no prior criminal history (excluding minor traffic offenses such as speeding or parking tickets). This may be a relief to many of our clients, even though the client still faces a maximum of one year in county jail and / or a maximum $5,000 fine (Penal Code § 288.4(a)(1)), although informal (summary) probation may also be granted.

However, if the defendant has any prior criminal history, it is a felony and looked upon as a serious crime. The client will most always have to register for life henceforth as a sex offender under Penal Code § 290 even if a plea bargain is reached that includes a “no contest” plea to a charge other than 288.4. Under Penal Code § 290, the client will have to register annually with law enforcement to confirm his residence, as well as after any change of residence. With such a requirement, Megan’s Law may publish the offender’s name on the Internet, although this consequence is subject to many exceptions that an attorney should explain to you.

The client facing a felony will also face a minimum prison term of sixteen months and a maximum term of four years in state prison (not county jail) (three years if you only arranged the meeting, but did not go) and / or a fine of a maximum of $10,000. Formal probation, usually conditioned upon taking certain sexual offender classes and significant amounts of community service, often can be negotiated. When attempted kidnapping, use of a firearm and other enhancements are alleged, the sentence can quickly escalate well beyond three years, especially if the defendant has any prior strikes.

The defenses to this charge often divide into two areas. Our client may claim that he really had no interest in sex with the minor, but was only interested in talking and taking her to dinner or a movie. Our client, in other words, just wants to “hang out” with the minor. This claim is usually undermined by the printed text of his online comments to the decoy.

The second defense is entrapment. This is much less common, but is could be that defendant claims the “minor” harassed him so much about meeting that he was pressured into meeting her against his will. This claim is usually rebutted by his comments and statements in the online chat.

For more information about sex crimes involving children, click on the following articles: