Our client, age 19, was coming home from a full day’s work at about 7:00 P.M. on a Wednesday night.  He was driving through Paramount on his way to Long Beach.  He dropped off a co-worker and then realized how late it was.  He was married and his wife was waiting for him at home.  Dinner was already on the table and getting cold.

Our client felt the need to hustle, so he floored the accelerator pedal on his 2013 Chevy Silverado full size pick-up truck.  His speed increased well beyond the thirty five mile per hour speed limit for the area.  As the traffic light in front of him turned yellow, he was at 83 miles per hour according to the “black box” data recorder under this driver’s seat, later recovered.

Synopsis:  Client runs red light while driving over 80 miles per hour, killing one person and injuring five others, including himself.  Case resolved for formal probation with four years of state prison suspended and 400 hours of community service.

As the light turned yellow, he momentarily let up pressure on the accelerator, according the “black box” data, but then floored the car again.  About a half second before reaching the intersection, the traffic light turned red.  From his right side, a car with two people entered the intersection.  The collision was unavoidable and severe.

Our client’s truck struck the other car, sending it into three other cars on the opposite side of the road.  Approximately an hour later, one of the occupants in the first-struck car passed away.  She was 74 years old.  Our client was rushed to the hospital with a punctured spleen and four other people were also taken to the hospital.

Our client was not under the influence of any drug or alcohol, however, three of the other five people had either alcohol above the legal limit, marijuana or meth in their systems.

Our client remained hospitalized for four days and was released without any contact with the police during his stay.  A year later, however, he received a letter in the mail notifying him that a criminal case had been filed against him for vehicular homicide.

The same day, he called Greg Hill & Associates.  It was a Saturday afternoon when he called Greg Hill & Associates.  He spoke to Greg, who listened to the client describe what had happened and advised him to contact a bail bondsman immediately to at least arrange the paperwork in case bail was set by the judge.  Greg also advised the client to take an online safe driving course as soon as possible so we could bring the completion certificate to court to show the judge to help on granting the client an own recognizance release.

Two days later, Greg Hill appeared with the client in the Compton Superior Court with the client, as well as his nervous wife, to recall the bench warrant and be arraigned.  The handling district attorney demanded $100,000 in bail, but the judge granted Greg’s request that the client be released on his own recognizance.  The judge was impressed that the client reported to the court within two days and did the online driving course upon receiving notice of the warrant. 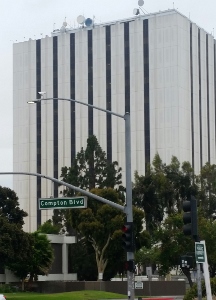 Compton Superior Courthouse
Through looking at the police report, Greg suspected that the traffic light facing our client may not have been working properly.  Greg’s legal assistant therefore went out to the intersection on the same day of the week as the accident, at the same time of the accident, and timed the duration of the yellow phase of the light.  This informal, unofficial timing of the light – ten times – yielded an average yellow phase of three seconds.  This was too short a yellow phase for a thirty-five mile per hour zone, which is supposed to be a minimum of 3.5 seconds long.  This meant that the decedent’s vehicle entered the intersection 0.5 seconds too early because the light phased from red to green for it too early.  In other words, had the yellow light facing our client lasted the minimum time (as required by Cal-TRANS), no collision would have taken place.  No one would have died.

Greg explained this to the District Attorney, but the plea bargain offered to our client did not go lower than two years in state prison.  Such a sentence, because it involved great bodily injury and was a strike offense, would be served in state prison and not county jail.  The minimum amount of time that our client would serve would be 85% of the 24 months, or 20 months and about 12 days.  This would destroy his marriage, end his career and most likely compromise his ability for future employment.

Greg met with the District Attorney’s supervisor and even prepared a lengthy defense position letter with a mitigation packet, to no avail.  The offer remained at two years in state prison.  The supervisor apologized, explaining that he had no choice because someone had lost their life.

Finally, Greg pled in the open to the judge, who graciously agreed to a purely probationary sentence wherein our client would be placed on five years of formal probation, with four years of state prison suspended (the mid-term), with a requirement that he perform 400 hours of community service, attend a Mothers Against Drunk Driving (MADD) Victim Impact Panel (VIP), attend the Hospital and Morgue Program (HAM) and pay restitution to the victims, all of whom already had their medical expenses and property damage covered by the client’s auto insurance.

The client was a very happy man to avoid state prison and be able to keep his job and return home each night to his wife.
Postscript:  Client sadly was later deported due to this conviction.
For more information about vehicular manslaughter and murder, please click on the following articles:
Contact us.
Serving Torrance, Long Beach, Compton, Airport Courthouses and Other Courthouses.