Our client, age 20, had been partying with friends in Manhattan Beach and was driving home to Compton. He had been drinking and smoking marijuana. He was going eastbound on Rosecrans Avenue, coming through Gardena and passing Western Avenue.

In a Nutshell:  Client, age 20, runs into four parked cars along the opposite side of the road in Gardena, case filed in Torrance Superior Court, case resolved with client taking only the three-month DUI class despite a 0.18% BAC.

It was a Friday night and there were cars parked along the westbound side of the road, along the curb on the north edge of the road. All the cars were unoccupied. 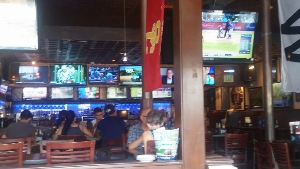 Our client was traveling well above the speed limit according to a driver also going eastbound who our client passed just before losing control of his car and veering into oncoming traffic. Oncoming traffic miraculously braked and allowed our client to pass through until he ran into four parked cars along the north edge of the street.

Our client had passed out just before he appeared to lose control. He was luckily not injured in to crash and got out of his car to survey the damage.

The Gardena Police Department arrived at the scene quickly and asked him what happened. According to the police report, our client was unable to form answers to the simplest questions and smelled of alcohol and marijuana.

A test of his breath alcohol content at the scene, using a Preliminary Alcohol Screening (PAS) device, showed his blood alcohol content (BAC) was 0.18% and 0.18% in the two breath samples he gave. According to the police report, our client could barely remain awake.

He was arrested and taken to the hospital, where he was medically examined due to his just being in a high speed collision. His urine sample was also collected, which tested positive for cannabinoids, meaning marijuana. He also provided a blood sample that was later measured to have a 0.17% BAC.

When Greg met with the client to discuss his case, he recommended that the client immediately begin attending Alcoholics Anonymous (AA) meetings to help Greg negotiate a better deal once the case was filed.

At the arraignment, Greg appeared in the Torrance Superior Court on behalf of the client. The client remained at school.

Normally, for a driver over the age of 21, with such a high BAC, speeding, being under the influence of marijuana and causing a collision with four other cars, the plea bargain offered would be quite punishing. It would most likely involve a $500 fine, plus penalties and assessments (total of about $2,500), at least ten days of Cal-Trans, maybe a short jail term (30 days or less), restitution, a nine-month alcohol awareness program (AB1352), restitution to the owners of the four other damaged cars for the property damage, the Mothers Against Drunk Driving (MADD) Victim Impact Panel (VIP), the Hospital and Morgue (HAM) program and the booking fee for the police agency that booked the client.

Here, however, the Torrance District Attorney seemed to have genuine sympathy for our client, who had attended ten Alcoholics Anonymous (AA) meetings prior to the arraignment. She thought this was significant and extended an offer of no jail, no Cal-Trans, no HAM, but thirty-six months of informal, or summary, probation, the three-month alcohol awareness program (AB541), a $390 fine plus penalties and assessment (total of about $1,875), the MADD VIP, restitution and the City of Gardena booking fee.

Greg could not believe the very nice offer for such facts. Greg recommended that the client accept the offer, explaining how low it was compared to what comparable cases are offered. The client wisely agreed to the favorable terms of the offer made.